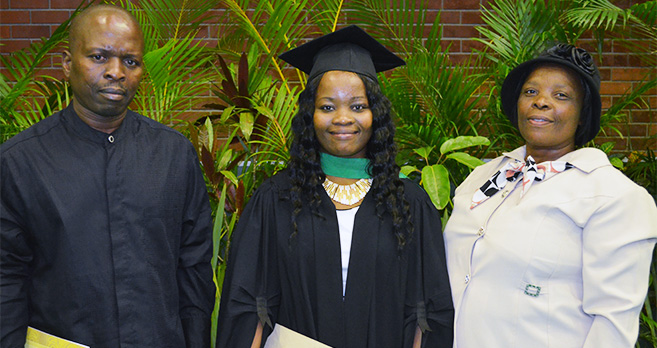 Ms Bongisiwe Shelembe grew up in the rural area of Msinga in KwaZulu-Natal where education is regarded as a precious commodity. The fourth eldest of 11 children in her financially challenged family, education was always a priority in her life.

Her mind was set on tertiary education and she persevered in her applications to UKZN until she was accepted into the Augmented Programme.

Shelembe experienced hardships and challenges at university as she had come from a school where English was not the language of instruction. But she never lost hope. ‘I would even walk around with a dictionary just so that I could communicate as I was not proficient in English.’

Shelembe’s research involved conducting a phytochemical investigation on the indigenous medicinal plant species, Bridelia micrantha and Sideroxylon inerme (both known as uMhlalamagwababa in isiZulu). These plants are used interchangeably by traditional healers to treat a variety of ailments.

Her research was supervised by Professor Sreekantha Jonnalagadda and Dr Roshila Moodley of the School of Chemistry and Physics.

Shelembe’s study showed that the classes of compounds isolated from the two plant species were different and therefore could not be used interchangeably for their medicinal benefit. This was further confirmed by GC-MS profiling which showed different compounds in the fruit of both plant species. The study also revealed the potential of the fruits of these plant species as neutraceuticals.

Shelembe said that her eternal devotion to God and self motivation kept her going. With the support of her parents and friends, Shelembe is now pursuing her doctorate.

‘I attribute my success to growing up in a rural area where a strong work ethic was instilled in me by my family,’ said Shelembe.  ‘I have always applied this to every aspect of my life.’

Shelembe thanked her supervisors who she said inspired her to achieve her full potential.

‘Bongisiwe was a dedicated and committed student,’ said Dr Moodley. ‘I am very pleased with her growth as a researcher and extremely proud of her achievement.’