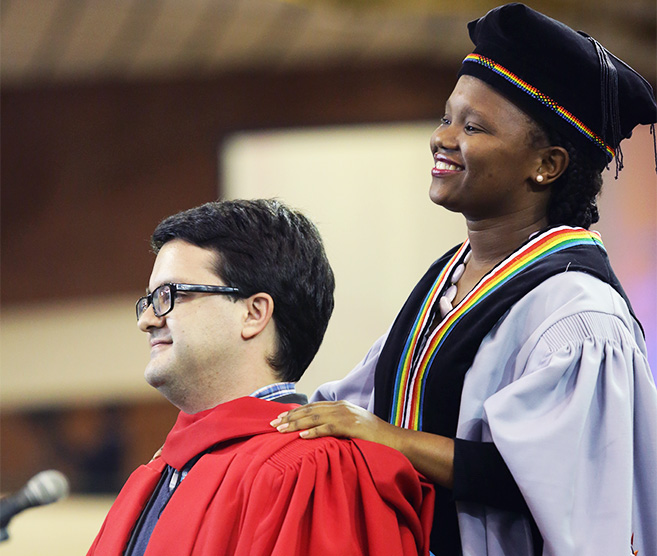 Mr Matthew Lasich was awarded his PhD in Chemical Engineering at a College of Agriculture, Engineering and Science Graduation ceremony.

It was an exciting and proud occasion for him and his mother Mrs Nadia Lasich, who has worked in UKZN’s Human Resources division for more than 20 years.

Lasich described his topic of research for his doctorate:  ‘A common approach to fit molecular thermodynamic models to experimental data is to adjust the unlike intermolecular interactions. My doctoral research was on the influence of methane-water interactions on predicted properties of methane-containing gas hydrates - in particular, whether this approach can always work, and what effect it has on the behaviour of the simulated system.

‘I found that while generally robust, changing the unlike interactions doesn't always produce a physically plausible system, and in some cases, a perfect match to experiments is not possible,’ said Lasich.

He studied Chemical Engineering because it incorporates a bit of chemistry, physics, mathematics and computer science, which he found engaging and interesting on multiple levels.  ‘It also deals with practical applications of basic science in areas such as manufacturing and environmental protection, so there is something for everybody.’

Presently completing his postdoctoral research at UKZN, this high achiever intends to take up a permanent academic position in South Africa where he wants to continue his research in basic science and further aims to introduce and educate the youth on science and technology.

Willard Gibbs, known for his scientific achievements in applied mathematics, physics, and chemistry, is Lasich’s role model. ‘Gibbs applied himself to the best of his abilities to the study of the natural world, without seeking fame, honour or the praise of others. This is an ideal all of us should aspire to,’ said Lasich.

His experience during his PhD has undoubtedly left him with an excellent and invaluable grounding as he gained exposure to international researchers from France, Germany, and Sweden through several collaboration agreements. ‘As I did my thesis by publication, I also gained experience not only in research, but also in publishing my research.’