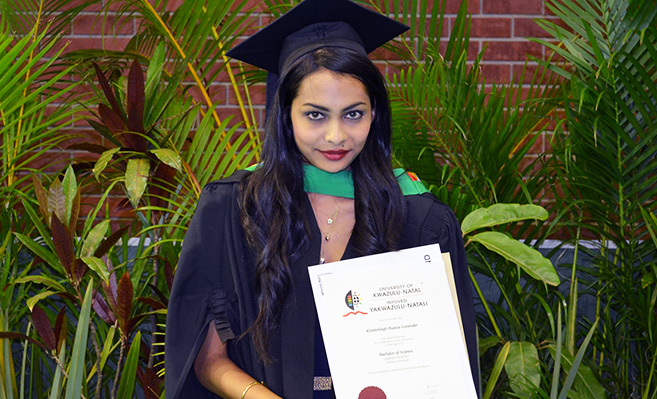 Govender won three awards at the College’s annual awards ceremony for top performing students and was also the recipient of UKZN’s 100th Anniversary Scholarship and the College Deputy Vice-Chancellor’s Scholarship, awarded for being in the top three academically performing undergraduate students in the entire university and in the College of Agriculture, Engineering and Science respectively.

Govender chose to study at UKZN as it was the only university offering the Applied Chemistry programme, which was what she was interested in.  ‘Also, UKZN is one of the best universities in the country, especially in terms of research, and I wanted to be a part of that,’ she said.

Speaking about her UKZN experience, Govender said:  ‘I have thoroughly enjoyed the diversity at the campus, the way in which culture is promoted through various programmes, the involvement and interactions of the lecturers with the students, and the various facilities in terms of sport and recreation made available to students.’

Govender also enjoyed the fact that the University offered peer assisted learning and tutors, which she had found to be a great help.

‘The most interesting research or experiments for me were those of the analytical kind,’ said Govender. ‘One of the projects involved a complete analysis of the swimming pools on the Westville campus and a public pool off campus. I found this particularly interesting as it allowed me to see how the chemistry concepts learned can be applied to real life problems.’

She is currently enrolled for a BSc Honours degree in Chemistry, after which she wants to specialise in forensics.

In her spare time, Govender reads, plays the piano or simply catches up on some of her favorite TV programmes. She is also fond of arts and crafts.