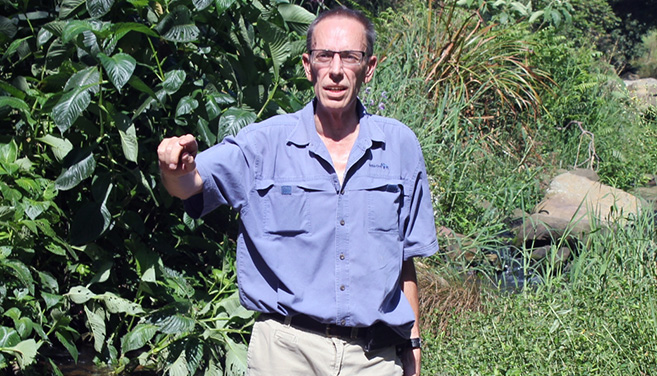 Dr Riaan Botes focused on the modelling, history and future aspects of flooding in KZN for his PhD in Geology.

Botes, who owns his own GIS consulting company, Geo Dynamic Systems, is an adjunct lecturer in the Discipline of Geological Sciences at UKZN.

His thesis focused in particular on the modelling, history and future aspects of flooding in KZN.  He was supervised by senior lecturer, Dr Andrew Green and Dr Alan Smith, a research associate in Geological Sciences.

In South Africa, two thirds of all natural disaster-related deaths occur in floods. In his PhD, Botes not only created an affordable method to delineate floodlines, but designated areas most vulnerable to flood-risk in KZN. ‘For the first time, climatic oscillations have been clearly linked with major flood events, allowing them to be predicted and planned for, a tool that will save lives throughout impoverished areas in South Africa,’ said Green.

Botes’s PhD grew out of discussions with the KwaZulu-Natal Department of Human Settlements around issues of providing low cost housing to people in areas presumed vulnerable to flood risk, but where data concerning the frequency and magnitude of flooding did not exist. It was clear that a revised, cost effective and time efficient technique to determine the extent and time scale on which flooding occurs was necessary.

Using state-of-the-art GIS systems, coupled with intricate field observations of the extent to which the major floods of the last 50 years have reached, Botes created a modelling technique that could quickly delineate areas most at risk by major floods that recur every 50 to 100 years.

In liaising with the local communities, he further realised that it is not just the large floods that occur on regional scales that are most damaging, but also localised flash floods, to which he amended his model in order to similarly address this issue.

Botes finally concluded his research by examining the climatic controls on flooding, recognising cyclical patterns to the most devastating floods and allowing for predictions as to when and where this flooding may occur.

‘The outcome of this thesis will certainly be the more effective delineation and management of flood driven natural disasters,’ said Green.

‘Dr Botes’ work is a good example of applied science that will benefit the underprivileged and developing communities of South Africa. He has discovered a significantly cheaper and quicker way to assess the risk facing marginalised communities located in environmentally sensitive areas. Furthermore, he is now able to predict with some degree of confidence when, and how badly, flooding may strike a particular area. In time, this model could be incorporated as a first assessment for risk to all rural areas, prior to more detailed engineering techniques being applied.’

Botes started his PhD on a part-time basis and despite owning and managing a full time consultancy business, managed to complete his thesis within four years, a phenomenal achievement that showcases his dedication, skill and ability to function under stress.

His thesis was returned from examination with all examiners considering the work to represent a fundamental step forward in our understanding of the flood dynamics of KwaZulu-Natal.

‘In my opinion, this type of work will spearhead the drive to more effectively manage the environmental risks facing the poorest and most vulnerable of communities, a truly admirable achievement,’ said Green.