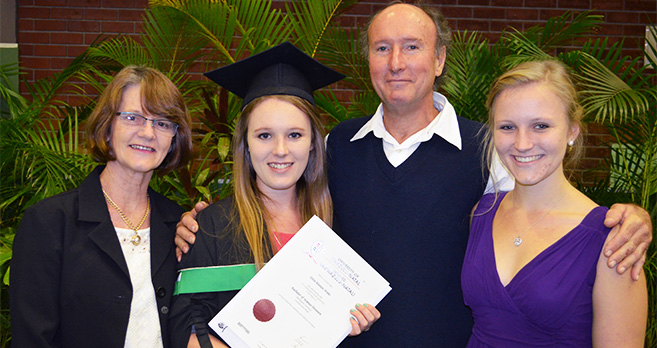 Wehr said UKZN recognised students who were academically strong and dedicated to their work. ‘This has motivated me to carry on performing at my best in all situations. The lecturers and staff are all very motivating and willing to help one progress with research.’

Wehr grew up with a surfing and nature-loving father who ultimately motivated her interest in marine life. ‘Ever since I was small I knew that I wanted to study Marine Biology as I was particularly interested in the ethnic marine life which I had studied frequently on our family visits to the rock pools at Toti and Scottburgh beaches,’ said Wehr. ‘After completing my BSc degree in Marine Biology, I decided to undertake my Honours in Biological Sciences as it allowed me to widen my growing interest in genetics and molecular biology.

‘UKZN has excellent postgraduate opportunities for research in Evolutionary Biology which is why I decided to undertake my Honours degree here,’ she said. ‘After attending a Biology Honours roadshow and listening to what projects marine biologist Dr Angus Macdonald had to offer, I was sure that he was the supervisor I wanted to learn more from.’

Wehr was fortunate to be among the first cohort of Honours students involved with the new Forensics laboratories that opened on the Westville campus in 2014.  ‘It was very exciting to apply the animal genetic techniques and principals I had already learnt in my undergrad to humans,’ said Wehr. ‘Overall, I thoroughly enjoyed the genetic techniques which I learned during my Honours project and the Forensics modules which I took part in.’

Wehr attributes her ability to work hard to her schooling at the Deutsche Schule Hermannsburg. ‘The standard was exceptionally high, which prepared me well for my first year at UKZN,’ she said. ‘I was taught to work and think independently and to give of my best under all circumstances. These qualities have helped me most throughout my honours year as we were expected to do a lot more self-studying and to rely less on our lecturers and supervisors.’

‘I am very fortunate to be part of the MAREVOL Lab as there is a bunch of very enthusiastic postgrad students who are always willing to brainstorm and share knowledge with one another and provide motivation when one needs it the most!’ said Wehr.  ‘My honours year was a lot more cheerful having people around you who were equally interested in my research as they were in theirs.’

Wehr is currently enrolled for a Master of Science degree.  ‘The major deciding factor which convinced me to carry on with my MSc at UKZN was my MAREVOL (Marine Evolution) lab family and the excellent guidance and enthusiasm from my supervisor, Dr Angus Macdonald.’

Wehr received a research grant from the South African Biodiversity Institute (SANBI) to undertake research on the Marine Aquarium trade within South Africa. She will be addressing the role that live rock plays in transporting invasive species when imported.

In her spare time, Wehr enjoys travelling, hiking and camping – ‘anything to do in the outdoors actually’. She is very fond of aquarium keeping, a hobby she has pursued since the age of five.  Wehr makes the most of good weather by running and sea kayaking.

Wehr thanked her parents, Erika and Alfred Wehr, for always providing her with the best education opportunities and supporting her during all the late nights of studying. ‘I would also like to thank UKZN, the NRF and SANBI for providing funding throughout my undergraduate, Honours and Masters years,’ she said.

‘I urge students to always give of their best academically and work constantly throughout the year rather than procrastinating and leaving things to the last minute.’