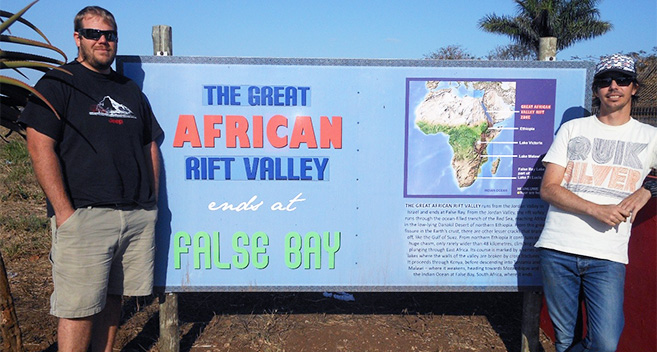 Peer-reviewed papers written by a UKZN PhD student have set the benchmark in the area of ocean floor research against which future researchers in the field will refer to.

This is according to one of the supervisors of a study done by scientist Dr Errol Wiles, who received his PhD at a College of Agriculture, Engineering and Science’s Westville Graduation ceremony.

Wiles, supervised by Professor Mike Watkeys, Dr Andrew Green and Dr Wilfried Jokat, conducted research for his Master’s degree but it was upgraded to PhD level.

Wiles undertook the first detailed investigation of the ocean floor microtopography between KwaZulu-Natal and Madagascar. This work identified the movement of ocean bottom currents integral to transporting heat around the globe, critical in the understanding of long-term climate change.

His study also revealed for the first time how the East African Rift System is propagating southwards into this region, breaking apart Madagascar from Africa.

This project was a culmination of several months of sea-based investigations, often far from land and in treacherous waters. By using state of the art geophysical techniques, Wiles provided the first examination of the deep seafloor between KwaZulu-Natal and Madagascar (the Natal Valley).

In using such processes, Wiles was able to map and delineate key seafloor features that had not been previously recognised. This allowed him to piece together the history and evolution of the field area from both a tectonic and oceanographic perspectives.

•   the first true study of the Tugela Canyon

•   the first identification of a number of revised current pathways of the deepwater circulation systems operating in the Indian Ocean. This is of particular relevance to climate change as these currents feed the global heat conveyor system.

‘Dr Wiles’s research forms a milestone in the understanding of the seafloor geology of the Natal Valley,’ said his supervisor, Dr Andrew Green.

The examiners of Wiles’s thesis were unanimous in their praise for its quality and scientific impact, two of the three examiners recommending acceptance of the thesis with no revisions, a feat almost unparalleled in the PhD examination process.

‘Dr Wiles was a reliable, hard-working and resourceful student and it gave me great pleasure to work with someone as motivated and naturally gifted as he is,’ said Green. ‘We worked on many other projects whilst he was busy with his PhD; I see him now more as a valued colleague than as a student.’

Wiles has been offered a prestigious post-doctoral fellowship from the Alfred Wegener Institute, to be housed at UKZN. This involves his continued work on the seafloor geology of the Mozambique basin.

Wiles said that he initially chose to study at UKZN as he admired its Geology discipline and because he was attracted to the regular field trips.  ‘You learn far more in the field than you do in the lecture theatre  and I like being outdoors,’ he said.

When asked what motivated his interest in geology, Wiles said:  ‘Basically a love for rocks and the outdoors. Rocks can tell wonderful stories once you learn their language.’

‘Now, when I look at a rock, I don't see a rock, I see the whole environment in which that rock was initially deposited as sediment,’ Wiles explained.  ‘Anything from five years ago in the case of a modern beach rock, to 2.9 billion of years ago in the case of sandstones and stromatolites from the White uMfolozi Inlier of northern KZN.  I am intrigued by the stories they tell, and how the various rock units fit together with regards to depositional processes within the specific depositional environment.’

Wiles enjoyed the opportunity UKZN provided to push himself and learn at a place where research, and being at the forefront of knowledge generation, is important.

‘To me, universities are about pushing the boundaries, and working toward understanding what we don't know about the world.’

Wiles thanked his family and friend for their support (Mother Wendy, girlfriend Laura and brothers Graham and Bryan), and his supervisors for their guidance.