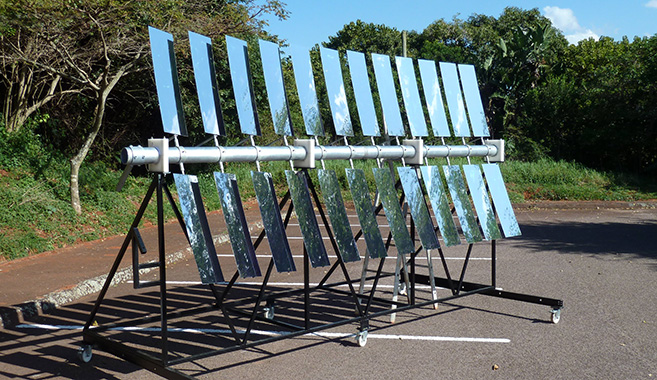 UKZN’s Group for Solar Energy Thermodynamics (GSET), a research unit at the Discipline of Mechanical Engineering working in the field of solar-thermal energy, was formed in 2009 with the intention of providing a foundation for solar-thermal energy research and is now investigating possible solutions to South Africa’s power shortage.

The group was created by UKZN staff members Mr Jean Pitot, who leads the initiative, and Mr Michael Brooks. Dr Clinton Bemont is now also part of the group.

‘Solar-thermal technologies will likely play a prominent role in the world’s energy future, as it transitions from the use of carbon-intensive, finite fossil fuels for power generation and transportation to the use of sustainable energy resources for these purposes. At present, solar-thermal technologies face a number of general challenges to their wide-scale deployment, chief of which is their comparatively high cost,’ he said.

‘To realise the significant potential that solar-thermal technologies offer in addressing the problems of climate change, diminishing fossil fuel reserves and energy security, the rate at which associated research is undertaken must be accelerated.

‘Establishing better and cheaper ways to convert solar energy into electricity is critical to this cause, and GSET provides the platform needed to enable this type of research at UKZN,’ said Pitot.

GSET is uniquely positioned, being the only group at UKZN that focuses primarily on solar-thermal energy systems, and one of only three research groups in the country that deals specifically with the thermodynamic considerations associated with solar power generation. Furthermore, GSET has strong links with Mechanical Engineering’s Aerospace Systems Research Group, which enables the fruitful cross-pollination of ideas and concepts between disciplines.

GSET’s work provides valuable research into innovative energy solutions desperately needed in South Africa, where the current power crisis highlights the significant shortage of generation capacity. The GSET team believes that this crisis could be alleviated to an extent in the near future by the uptake of rapidly-deployable renewable energy systems. They have taken the route of optimistically seeing opportunity in the crisis, saying that the electricity shortage, coupled with South Africa’s world-class solar energy resource and engineering talent pool, provide fertile ground for the country to grow into a world-leader in solar-electric power generation, especially concentrating solar power generation.

Pitot was awarded the Fulbright Scholarship in 2013 and spent six months in the United States conducting research. GSET is also supported in its work by Professor Lance Roberts and Professor Graham Smith and has facilitated research by a number of postgraduate and undergraduate students. Part of GSET’s main accomplishments since 2009 have been the graduation of several Masters students in Mechanical Engineering.

GSET is currently assisting the University of Zululand to establish a research capability in solar energy as part of their outreach efforts to build capacity in other institutions using the knowledge they have gained over the years. The group’s collaboration with Stellenbosch University has enabled them to play a central role in the development of the Southern African Universities Radiometric Network (SAURAN) which provides free access to solar energy data from stations across southern Africa.

Providing critical support to the group’s activities is their access to a number of cutting-edge technology resources. On campus, GSET operates an advanced solar energy measurement station that feeds sun strength information into the Southern African Universities Radiometric Network (SAURAN) and allows for the measurement of the performance of solar energy systems that the students build. Students doing research through the centre also have access to state of the art computers and software for conducting finite element, computational fluid dynamics and optical ray-tracing analyses.

In addition to their contributions to SAURAN, GSET has built a range of solar concentrating systems that can be used to generate high intensity solar flux on targets. Currently, GSET is developing the Solar Energy Research Amplified Flux Facility or SERAFF, which is believed to be South Africa’s first solar furnace facility. SERAFF will enable the testing and development of concentrating solar power receiver systems and novel high temperature materials. The facility may also be able to facilitate solar-thermo-chemistry experiments. GSET has also pioneered a novel, lightweight, simplified concentrator system, based on compounded linear Fresnel optics.

The individuals involved in GSET see huge potential for their work to contribute to the renewable technologies that South Africa is currently rolling out in an effort to diversify its energy mix, which currently relies almost exclusively on coal-fired power stations.

According to the group, GSET’s work in solar concentrators, thermodynamic cycle analysis, solar resource assessment, and allied technology development is aimed at supporting the national effort. By its nature, the research the group conducts is not limited to application in South Africa alone. The technologies developed by GSET are globally relevant and contribute to the overall advancement of the field of renewable energy research.