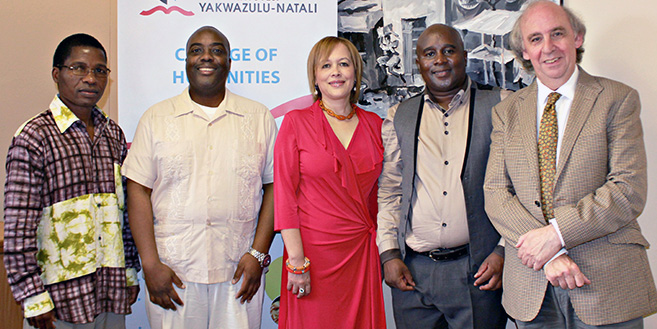 Lecturer in Music at Morgan State University (MSU) in the United States, Dr Samuel Springer, says he is impressed by the high standard of teaching and the calibre of music students at UKZN.

Springer was a guest of the School of Arts, Music discipline where he was warmly welcomed by the DVC and Head of the College of Humanities, Professor Cheryl Potgieter, whom he had met when she visited MSU last year.

Springer was taken on a tour of the various music facilities available within the School, meeting academics and being given the opportunity to sit in on lectures and recitals.

He expressed his excitement at being at UKZN and his interest in learning and experiencing what the University offered. ‘It was particularly educational to attend some of the lectures and recitals. Professor Salim Washington’s Jazz composition lecture was informative - I learned a thing or two.’

Witnessing the performance of Opera students (soprano, tenor and bass) Springer was impressed by the high standard of teaching and the calibre of music students. ‘The lecturers are able to connect the students to music and nurture the raw talent they undoubtedly have.’

He advised the students to ‘stick to what you love’ and to take on challenges head-on and to have no regrets when following one’s dreams.

He was hopeful his visit to UKZN would result in a partnership being formed leading to an exchange programme for staff and students between the two universities. ‘We can learn from each other and add to a more globalised education.’

Said Mr Andrew Warburton, Lecturer at the Music department: ‘When Dr Springer visited our school four of our opera students performed for him. He was extremely impressed and offered to start a dialogue with a view to an exchange programme for our students as well as helping them to further their studies at Morgan State University. It was extremely pleasurable meeting him.’