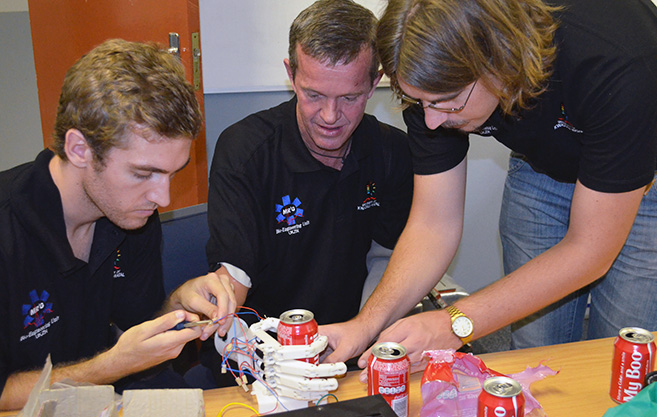 A UKZN Mechanical Engineering graduate and his supervisor have opened a robotic prosthetics company following the success of an artificial hand they designed.

The company, Touch Prosthetics, aims to drive the field of prosthetics technology , making it more accessible to the general public through the production of affordable, modular advanced prosthetics using innovative 3D printing.

This was made possible using revolutionary research in the area of upper-limb electromyography (EMG) prosthetics. Since the initial design won widespread acclaim, van der Riet and Stopforth have been collaborating on the development of a new control system to make using the arm simpler.

With the support garnered from government and business after winning recognition in competitions such as the Step-Up Technology Innovation Competition and GAP Medical Competition in 2013, Touch Prosthetics has been launched and has produced its updated prosthetic hand model.

The company aims to be on the forefront of cutting-edge research and allows for simple and affordable upgrades to its accessible models to increase their functionality. Additionally, the company is working extensively in the area of sensory feedback, which is where modern prosthetics are lacking in their ability to engage with their surrounds. Touch Prosthetics’ innovative response to this problem is the unique design of prosthetics which restore the sense of touch to amputees without the need for surgery.

Stopforth and van der Riet have been joined in their ventures by Mr Greg Jones, a Masters student in Engineering, who is being supervised by Stopforth. Jones acts as a design consultant to the company while conducting his masters research on the mechatronic design of a low-cost and improved prosthetic; the Touch Hand II.

This prosthetic hand is a bio-mechatronic system, integrating the disciplines of mechanical engineering, electronics engineering, computer engineering and biology. The Touch Hand II consists of a mechanical exterior with an electronic interior, with the movement of the fingers controlled by an amputee through the use of small electrode pads placed on the amputee’s residual muscles, which sense muscle contractions.

Stopforth’s position in the company is that of a research project manager and advisor who keeps project requirements and specifications in line while making sure that students are able to complete a postgraduate degree; ideally in a year for masters students and two years for PhD students.

Van der Riet’s focus in the company is that of managing the technical development of the Touch Hand, managing fundraising, creating linkages with people and companies, and developing the optimum business strategy to move Touch Prosthetics forward.

Van der Riet, who said he had fallen in love with innovation and creating new things that improve people’s lives, has enjoyed taking his research to the level of entrepreneurship, seeing all of his ideas and creativity and pursuing the dream of becoming a serial robo-entrepreneur.

Stopforth, who studied at UKZN and joined the School of Engineering in 2008 as a staff member, began the journey of research into prostheses in 2009 when he started the Mechatronics and Robotics Research Group (MR2G) Bio-Engineering Unit. The research pursued in the Unit involved exoskeleton legs and an exoskeleton arm, which over time evolved to the development of a prosthetic hand and leg. Further incorporated control features by means of an electroencephalogram (EEG) headset were also researched through a PhD student. The new hand design incorporates haptic feedback (for sensing vibration and temperature) and the control by means of EMG signals.

Stopforth sees the value in the company as taking theoretical research to a different level where models are tested out in an application.

‘If research cannot be applied and used in the future, then it is a waste of time and resources,’ said Stopforth.  ‘So our research is “killing two birds with one stone” – students are able to obtain post graduate degrees, but they are also contributing to making a difference to the world.’

Stopforth believes that students get excited and pursue research that has a purpose and that will have an effect on people’s lives. His research groups have adopted an attitude they have learned from amputees, which is to adapt and progress.

Van der Riet said the prospect of being able to improve lives had been a driving force in his decision to use his skill in robotics to assist people, one he found most rewarding. With the launch of Touch Prosthetics, he had seen the culmination of his work to make these kinds of prostheses widely available to those who needed them most.

Jones added that he was excited by the fact that such an innovative robotics-based project was happening at UKZN, given the need for development in robotics within South Africa.

Stopforth said he has been inspired by amputee John Harris, who is testing the prosthetic devices for the company.

‘John is able to continue with his life and performs tasks that I sometimes wonder if people without disabilities are able to achieve; this has also given us motivation to develop devices that people like him will be able to use,’ explained Stopforth.

‘I am also hoping that this will motivate the undergraduate students to make sure they have the ability to make a difference in South Africa and the world.’

* A UKZN hosted website will be developed soon, but more information about Touch Prosthetics can be found at https://touchhand.wordpress.com For more details about: Touch Prosthetics, the research being conducted, or performing postgraduate research as a consultant for the company, contact Professor Riaan Stopforth (stopforth@ukzn.ac.za) or Mr Drew van der Riet (dvdriet@gmail.com)