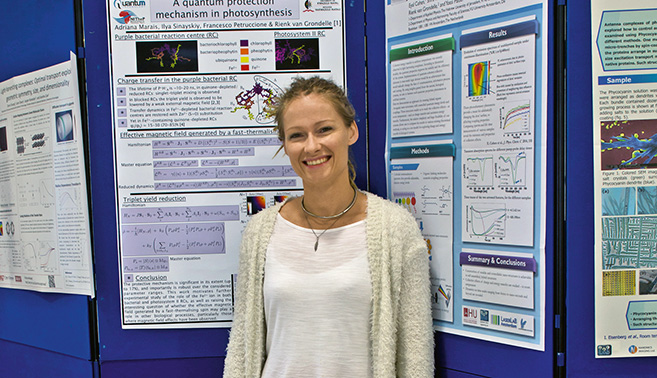 Dr Adriana Marais with her research poster. (Picture: L’Oréal-UNESCO “For Women in Science”).

Dr Adriana Marais, the UKZN PhD student widely known for making it onto the final 100 candidates’ list for the Mars One mission, has been named as one of 15 promising young scientists – “International Rising Talents” - from around the world at the 17th L’Oréal-UNESCO “For Women in Science” Awards ceremony in Paris.

The ceremony, held annually since 1998, awards five Laureates with the L’Oréal-UNESCO Prize in Physical Sciences. The event seeks to acknowledge and celebrate the achievements of women in science who are on the cutting edge of research in their fields. Two of the more than 80 laureates awarded over the years have gone on to win Nobel prizes.

L’Oréal and UNESCO have announced the five laureates to be honoured in 2015 – they are all established scientists who have distinguished themselves in their fields thanks to the excellence of their work. The Laureates are British Chemist, Carol Robinson; Brazilian Astronomer, Thaisa Storchi Bergmann; Canadian Polymer chemist, Molly Shoichet; Chinese Inorganic Chemist, Yi Xie and Moroccan Physicist, Rajaâ Cherkaoui El Moursli.

L’Oréal and UNESCO teamed up in this endeavour to attempt to address the shortage of women working in the realm of science by celebrating those contributing significantly in their fields.

The ceremony also singled out 15 ‘International Rising Talents’ chosen from among the 236 fellows recognised by the programme in 2014 – these are women working as postgraduate or postdoctoral fellows who demonstrate potential to change the world through their innovative work.

Each of the 15 scientists rewarded, including Marais,  received grants towards their research.

Director General of UNESCO, Irina Bokova, and Chairman and CEO of L'Oréal and Chairman of the L'Oréal Foundation, Jean-Paul Agon, opened the ceremony with Bokova emphasising: ‘We don't celebrate “women scientists”; we celebrate exceptional scientists who happen to be women.’

Marais, who was selected for this award after receiving a L'Oreal-UNESCO Regional Fellowship for Women in Science in sub-Saharan Africa in 2013, featured among the group thanks to her research in Quantum Biology, an area which attracted her interest because it questions the origins of life and what distinguishes living organisms from the inanimate matter of which they are made.

At the ceremony, Marais, who has won recognition for her participation in the Mars One initiative, spoke about her dreams of extra-terrestrial travel: ‘Since I was a child, I have always dreamed of living on another planet.’

Her resilience and courage has landed her a spot among 100 hopefuls who plan to be in the final team of four to colonise Mars in 2024.

‘It is a fantastic honour to be recognised for my research. I am driven by curiosity and the pursuit of knowledge. As a researcher, I feel extremely lucky to be spending my days trying to answer questions I have about the world around me. While we have not yet discovered “what life is”, we are certainly lucky to be alive during such an exciting time in the history of life on Earth,’ she said.

The research, co-authored with her supervisor, Professor Francesco Petruccione; co-supervisor, Dr Ilya Sinayskiy of the Centre for Quantum Technology at UKZN, and Professor Rienk van Grondelle of the Vrije Universiteit in The Netherlands, is titled: “A Quantum Protective Mechanism in Photosynthesis.”

It deals with oxygenic photosynthesis, specifically the mechanism that plant systems have developed to protect themselves from the effects of the harmful free radicals through the use of the effective magnetic fields generated by quantum mechanical property spin.

According to the study, this is a clear instance in which a quantum effect plays a macroscopic role essential for life, hinting at the role processes like photosynthesis could have played in the origin of life as well as the potentially important implications this mechanism could have for living organisms in general as the same free radicals are associated with aging and disease.

‘A society with only men doing science can do only half the science that could be done if women were more involved,’ said Marais, who hopes her achievements will inspire and encourage curiosity in both young girls and boys, and ‘let them know that science is an exciting and rewarding career option’.

She also hopes the awards will achieve their goal of inspiring more women to get involved and stay in science, and show them some of the opportunities for funding and support afforded by initiatives such as ‘For Women in Science’.

The week-long trip included visits to UNESCO Headquarters, the (L'Oréal) Aulnay Advanced Research Centre and the French Academy of Sciences.