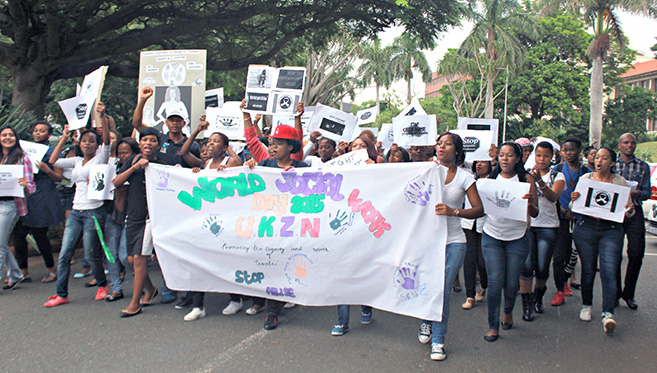 UKZN’s Social Work Student Association on the march against women and child abuse.

Armed with placards and posters, the Social Work Student Association at UKZN organised a march from the King Dinizulu statue in Berea Road to the Durban City Hall in solidarity against women and child abuse.

The students were displaying their dismay and anger at the high abuse rates as recorded in the KwaZulu Natal report on Women and Child Abuse and hoped to increase public awareness about such issues.

Joining the students on the march and engaging in their World Social Work Day celebrations at the City Hall were government officials, Childline representatives, Department of Social Development councillors and members of the public.

‘We aligned the march with International Women’s Day and World Social Work Day in an effort to educate the public about women and child abuse. They need to realise this is a problem requiring urgent attention,’ said Mr Manqoba Mdamba of the Social Work Student Organisation.

The Association provided infotainment about the issue of women and child abuse and took a pledge to be the best social workers they could be and to contribute to the betterment of communities and the country.

Acting President of the Association, Mr Melusi Shabalala, hopes to mobilise men to take a stand against women and child abuse. ‘Women and children are the most vulnerable group and as men, we should take a role in combatting social ills such as rape and violence. We must bring back the dignity of men.’

Shabalala said the Association was now part of the Department of Social Development’s Social Ills Task Team in KwaZulu-Natal and was recognised by the University Student Representative Council (SRC) as a society, affording the Association greater power to make positive meaningful changes.

‘The Association has the potential to be great and to contribute to change but we are hindered by funding and we hope that the public and the UKZN community will heed our call to assist in any way they can,’ he said.

Social Work Lecturer Dr Tanusha Raniga said: ‘We are very proud of the Social Work Student Association who spear-headed the organisation of the march.

‘This initiative was an effort to show our commitment to promote the dignity and worth of all peoples, one of the core pillars of the Global Agenda for social work and social development.’