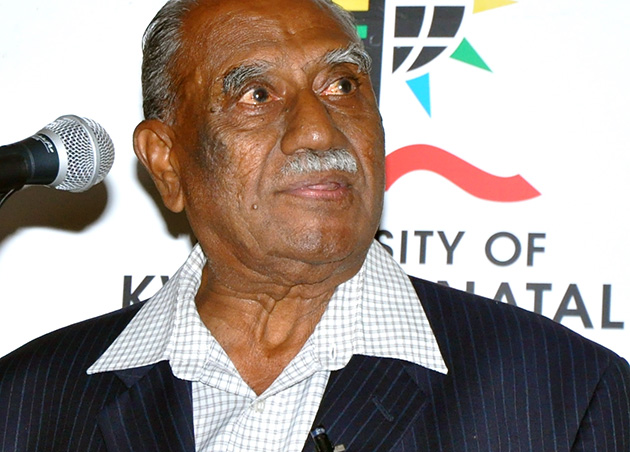 Reflections on 60 years of the Freedom Charter

The underlying message of the Freedom Charter reflects a nation at peace with itself and the world, Comrade Swaminathan Gounden told staff, students and members of the public at the inaugural Dr Phyllis Naidoo Memorial Lecture.

The lecture, titled: “Reflections on Sixty Years of the Freedom Charter and hosted by UKZN’s Gandhi-Luthuli Documentation Centre, honoured Dr Phyllis Naidoo’s contribution to the struggle for South African freedom. Known for her indomitable spirit and commitment to the struggle, Naidoo passed away on 13 February, 2013

Gounden, who is among the handful of surviving Freedom Charter veterans, spoke about the Charter and the Congress of the People Conference on 26  June, 1955 in Kliptown, Soweto.

‘In the years preceding the Freedom Charter our people experienced repression in the fields of education, housing, culture, land, human rights, pass laws, the Group Areas Act, the Slums Act and many other discriminations imposed by the apartheid government, ’ said Gounden.

The purpose of the Congress of the People was to mobilise South Africans and make them ‘go on the offensive against reactionary forces at work in our country instead of being on the defensive’.

‘We went door to door, factory to factory, and talked to people on the street.  People’s demands were written down, some on tiny scraps of paper.  This was real democracy at work.

‘Ordinary working people had never been asked before about what they wanted to see in their country.’

The demands were sent to the Provincial Action Committee which in turn selected relevant demands and submitted them to the Congress of the People conference. The Natal contingent of 365 delegates was led by Archie Gumede who was a 1956 Treason Trialist and later President of the United Democratic Front.

Gounden paid tribute to Comrade Billy Nair, a stalwart in the struggle who served 20 years on Robben Island. ‘Comrade Billy presented a paper on labour and trade unions and its effect on the working class community.’

Other matters discussed at the meeting included human rights, land ownership and housing.

Gounden applauded the progress made since the advent of democracy but acknowledged there was still work to be done. ‘Looking back at these past 60 years, we have come a long way.  A democratic government has restored our dignity and humanity.  The majority of our people are more comfortable now than their parents ever were.’

However, he cautioned: ‘Much more needs to be done … Our social cohesion must be a prized goal.

‘Apartheid divided.  Our democratic movement united … the underlying message of the Freedom Charter is a nation at peace with itself and the world.  This unity we cannot take for granted.  We must work hard at it every day,’ he said.

Naidoo’s life is documented in an extensive collection at UKZN’s Gandhi-Luthuli Documentation Centre on the Westville campus.

The collection, which Naidoo donated to the University in 2006, includes letters, photographs, press cuttings, books and previously unpublished short stories which illustrate the contributions of activists in the liberation struggle.

Members of the public are welcome to peruse the collections and immerse themselves in South Africa’s rich and turbulent history.

The Gandhi Luthuli Documentation Centre is in B Block (beneath the Library) on the Westville campus and is open between 8am and 4.30pm Monday to Friday.