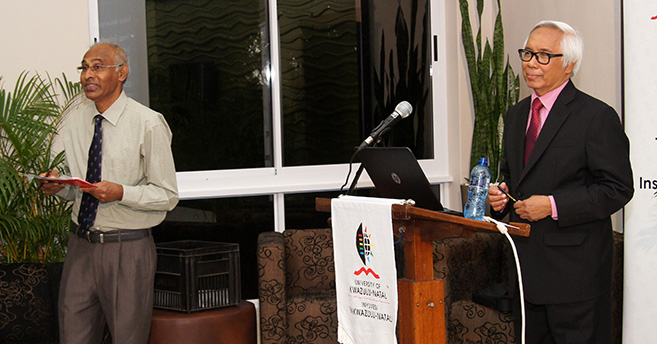 Researchers have been urged by a visiting Malaysian scholar to conduct research that is relevant to society.

Science Advisor to the Prime Minister of Malaysia, Professor Zakri Hamid, made the call during his public lecture hosted by UKZN’s Research Office in collaboration with the Academy of Science of South Africa (ASSAf) and the Department of Science and Technology.

In his lecture titled: “The Role of Science Advice in National and International Economic Development”, Hamid said scientists were guilty of not calling a spade a spade. He advised them to get buy in or form collaborations with government but most importantly win the support of the public.

‘If the public is with you, you will find a way to government…it is all about advocacy,’ said Hamid.

The challenge with advising government was to ensure that decisions and policies were made with the best available scientific information.

‘Reflect on what you can give to your country, society and the world. Together science and scientists can provide a better future for the world.’

He said the role of scientists had never been as crucial as it was now, with one of the challenges being how they communicate.

The three prerequisites for every scientist were: Credibility, Relevance and Legitimacy.

‘Credibility is a non-negotiable for any academic and what you are researching should have relevance to your society.’

During the question and answer session, Hamid said universities needed to encourage their graduates to become entrepreneurs. Many inventions and improvements were the work of scientists including the improvement in the forecasting of weather conditions.