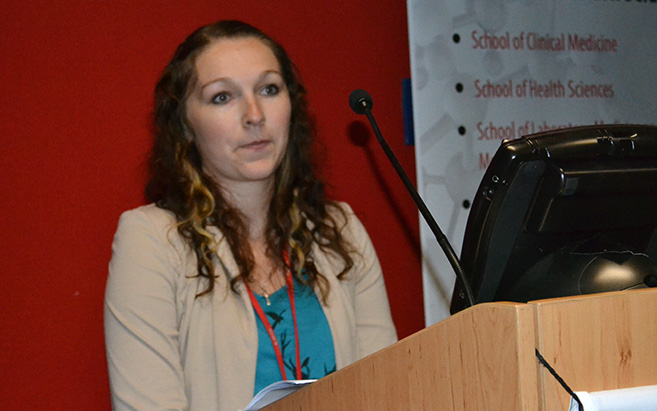 A study to identify novel transcriptional changes in Mycobacterium Tuberculosis that could lead to drug resistance or compensate for loss of fitness or function due to a drug resistance conferring mutation, has been completed by Ms Lynne de Welzen of UKZN’s School of Laboratory Medicine and Medical Sciences.

Based at K-RITH, de Welzen said her study titled: “Whole Transcriptome Analysis of Drug Susceptible and Drug Resistant Isolates of Mycobacterium Tuberculosis using RNA-Seq”, examined whether there were additional methods of drug resistance in M. tuberculosis by looking at the genetic level, ie the level of RNA.

She said 14 clinical isolates of M.tb that had previously undergone whole genome sequencing, from either Beijing or KZN lineages, with varying drug susceptibilities, were selected for RNA-Seq. RNA was extracted using the TriZol based method, on mid-log phase cultures, and libraries were prepared for sequencing. Prepared libraries underwent RNA sequencing on an Illumina HiSeq 2000.

Transcriptional profiling revealed differential gene expression between drug susceptible and drug resistant isolates as well as between lineages. These data identified genes that were significantly up or down-regulated which could provide novel insight into mycobacterial resistance and compensatory evolution, upon further investigation.

‘My study is based on the huge problem we have with tuberculosis and drug resistance. Instead of looking at the DNA, we want to look at the RNA which will tell us which genes are being expressed and which are not. For this we use the technique of RNA sequencing (RNA-seq).

‘We have taken clinical isolates found in patients and are hoping to find novel mechanisms of drug resistance. We have included drug susceptible clinical isolates so that we can compare a susceptible phenotype to that of a resistant phenotype. The idea would be that certain genes will be identified as being significantly up or down-regulated. These genes could have the potential to be validated as targets to develop new drugs, which are desperately needed,’ de Welzen said.

‘There have been very few studies done on RNA sequencing in M.tuberculosis in the world, let alone South Africa. The opportunity to utilise such a novel technique (RNA-seq) especially in KwaZulu-Natal, where Tuberculosis is a serious problem, could really help us understand this bacterium and why it is so deadly.’

She said unlike other microorgansims, M. tuberculosis could take up to four weeks to grow/culture, before an experiment could be conducted.  ‘It therefore takes much more time to generate data.

‘We also need to respect the bacterium for what it is and need to follow strict safety guidelines when working with it.’

De Welzen said she was very fortunate to be sent to Oslo, Norway, to study the intensive technique of RNA-seq library preparations which allowed her to generate her own RNA-seq libraries before sending them off to be sequenced, as well as learning some simple bioinformatics to assist in her data analysis.

According to de Welzen, South Africa is one of the countries with the highest burden of TB, with an estimated incidence of 500 000 cases of active TB in 2011.

She said of those cases, 66% of individuals had both HIV and TB. For individuals who were infected with drug resistant strains of TB, there were fewer treatment options available.

‘The drug treatment regime is also much more intense and longer making patient non-adherence more common, especially in resource-limited and low-income countries. We are clearly facing an epidemic which needs to be addressed.

De Welzen is currently applying to take her study through to a PhD so that she  can validate the genes that they have found as potential contributing factors to drug resistance.

She believes education is the key to understanding health and disease and the impact on an individual as well as those around them. ‘I believe we are given the opportunity to learn for the purpose of teaching those who do not have the same opportunities.’