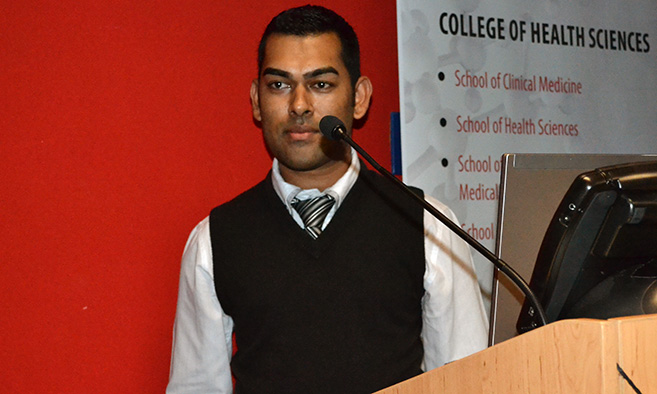 The study titled: “Mycobacterium Tuberculosis pili (MTP) Promote Adhesion to and Invasion of THP-1 Macrophages”, aimed to determine whether MTP contributes to the pathogen’s colonization of host macrophages.

‘Winning this prize was a surprise, especially after also placing third at last year’s symposium,’ said Ramsugit. ‘It is a wonderful feeling having research recognised and praised by senior researchers in the College.’

Ramsugit was thankful to the College for providing a platform to present the research findings. ‘Being able to present at internal symposia enable young researchers, like myself, to learn the skills of presentation, to generate new research questions, provide the opportunity for potential collaboration, learn to handle scientific critique and defend one’s research.’

According to Ramsugit, more than a third of the world’s population are infected with TB, a disease responsible for 1.5 million deaths in 2013. He believes that reducing the global burden of TB requires the development of more effective treatment, diagnostic, and preventative strategies. This in-turn is dependent on a greater understanding of the mechanisms by which the etiological agent, M. tuberculosis, is able to cause disease.

‘Pili are hair-like structures that are present on the surface of several bacterial species,’ said Ramsugit. ‘In 2005, researchers at the University of Arizona showed that M. tuberculosis produces pili. However, their role in this organism was not previously reported. This is currently the focus of our research team.

‘As part of my PhD project, we knocked out the gene that is responsible for producing pili, to create a mutant TB strain that lacks pili. We also complemented the mutation, creating a TB strain that produced excessive amounts of pili. We, thereafter, compared the phenotype of the pili-proficient and pili-deficient strains and our results showed that the strains that produced pili were better able to form a biofilm (i.e. a community of bacteria). Living as a community allows bacteria to become tolerant to antibiotics and, therefore, influence the way we treat infections.’

The study also found that the strains expressing pili were better able to infect human cells, than the strain lacking pili. ‘Pili, therefore, play a role in these important aspects of TB pathogenesis. These results lead us to believe that developing drugs and vaccines targeting M. tuberculosis pili may hinder the ability of this organism to infect humans,’ said  Ramsugit.

He said the field explored in his research was new and related to several novel aspects of TB research. He said initially M. tuberculosis was regarded as an organism that did not produce pili. ‘Prior to this research, there were only two published journal papers reporting that M. tuberculosis produces pili. The ability of M. tuberculosis to form biofilms has only recently been documented. Another relatively unexplored area of TB research is the role of adhesins (i.e. bacterial surface molecules that enable attachment of the bacterium to surfaces or other cells).’

He published four research papers in scientific peer-reviewed journals last year. The first paper, originally published in the Antonie van Leeuwenhoek Journal of Microbiology, was chosen to be featured in World Biomedical Frontiers (http://biomedfrontiers.org/infection-2014-4-15/) because of its ‘innovation and potential for significant impact’. World Biomedical Frontiers is an online publication that focuses on ‘cutting-edge biomedical research from around the globe’.

Based at the Medical Microbiology and Infection Control Academic Unit in the School of Laboratory Medicine and Medical Sciences, Ramsugit is currently in the process of finalising his thesis.

He has previously received the Dean’s commendation and 22 certificates of merit/pass with distinctions during his undergraduate and honours degree. He is a member of the International Golden Key Honours Society and was awarded the MERCK Young Scientist Award for being the top final year Biochemistry student at UKZN’s Westville campus in 2010.