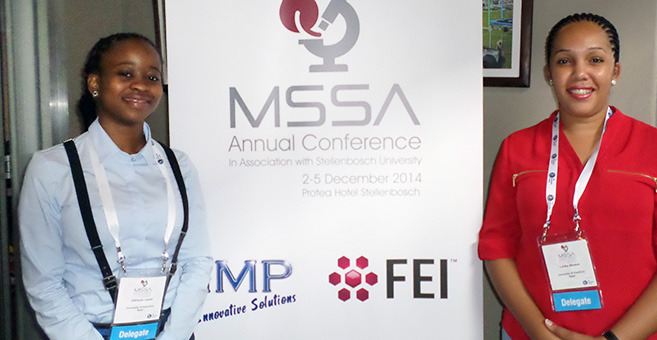 Ms Zikhona Jojozi and Ms Lorika Beukes at the 52nd Annual Conference of the Microscopy Society of Southern Africa.

Of Bacterial Predators and Biofilms

Postgraduate students from the Discipline of Microbiology on the Pietermaritzburg campus, Ms Zikhona Jojozi and Ms Lorika Beukes, presented their research at the Microscopy Society of Southern Africa’s 52nd annual conference in Stellenbosch.

Jojozi, who is currently working towards her MSc in Microbiology, gave an oral presentation on the microscopic analysis of a bacterial isolate from KwaZulu-Natal that is feeding on other bacteria. Using light and electron microscopy, she showed that the tiny Bdellovibrio-like predator attacks its prey - other bacterial cells - to gain a source of carbon and energy.

Jojozi and her supervisor, Professor Stefan Schmidt, are convinced that the microscopic predators they handle in the laboratory are underestimated, as most non-microbiologists are not even aware of their existence. Although tiny in comparison to a lion or a leopard, they are mighty predators which effectively eliminate their prey, says Schmidt. ‘Such bacterial predators are therefore termed “living antibiotics” as they might be able to eliminate antibiotic resistant pathogens that are not responding to conventional treatment.’

PhD candidate Beukes - also supervised by Schmidt – delivered an oral presentation on the ability of representative bacterial pathogens and hygiene indicators from pit latrines to form biofilms. The development of such biofilms over time was analysed in the laboratory using scanning electron microscopy.

Beukes explained that such biofilms were a serious hygiene problem especially when containing potentially pathogenic bacteria that can cause infections.

She used simultaneous staining with two different dyes and analysis of samples by confocal laser scanning microscopy to compare the efficacy of well-established biocides and common household cleaning formulations to inactivate cells present in biofilms formed on representative kitchen surfaces. Her results show that mature biofilms generated on household surfaces are not easily inactivated by common household cleaning formulations but instead require biocides that are not appropriate for use in households due to their considerable toxicity.