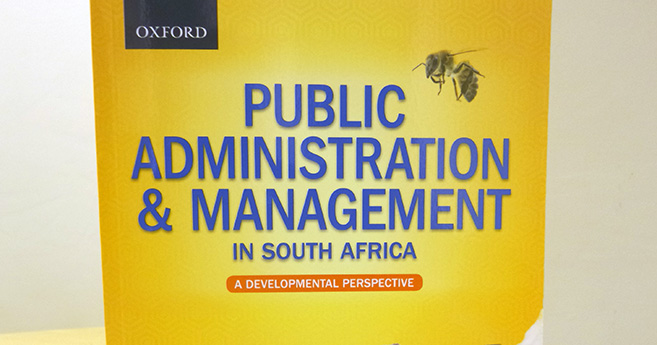 New Book on Public Administration and Management in SA

Some of the critical issues covered in the chapter by Dassah, titled: “The Role of Technology in the Functioning of the State”, are theories of information technology and public administration; information and communication technologies (ICTs) and South Africa’s pursuit of a developmental state, which discusses access of South Africans to various forms of ICTs (cellular phones, landlines, personal computers and the Internet) on a provincial basis.

The chapter also provides good examples of how cellular phones are innovatively used in various countries on the mobile government (m-Government) platform.

According to Dassah, it is becoming clear that the new frontier for public service delivery in developing countries seems to lie in m-government.

In the chapter, Africa’s and South Africa’s e-readiness as well as the digital divide are examined. Other key issues covered include why African public sector ICT projects fail; technology as a mechanism to enhance extensive service delivery; complexity of societal expectations; education and training; advantages and disadvantages of technology in service delivery securing technological mechanisms, and controlling technology.

Reddy wrote his chapter titled: “Policy Management for Effective and Efficient Public Administration”, jointly with Dr J Govender, a UKZN doctoral graduate and currently Senior Lecturer at the Nelson Mandela Metropolitan University in Port Elizabeth. It interrogates critical issues, including the origins of policy; strengthening public administration through public policy; policy management as a tool for efficient public administration and the policy making process and role players. This chapter is particularly important bearing in mind that South Africa has put in place many good policies since 1994 but has not effectively implemented them.

About 1 700 copies of the book were sold in the first week of printing and the second print run is underway to meet the demand.

The book is viewed as ‘an engaging text presented in a real, applied and visual manner, making it the essential introduction for all (undergraduate) students…in public administration and management’.