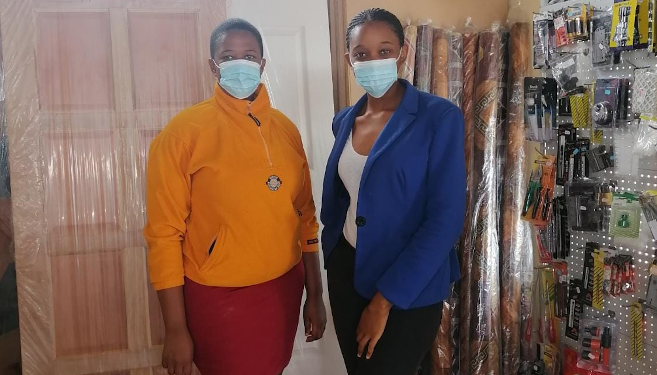 An intern at UKZN’s Centre for Transformative Agricultural and Food Systems (CTAFS) Ms Noxolo Jila of Swayimane in Wartburg has used her entrepreneurial skills and knowledge gained through working with the University and the uMngeni Resilience Project (URP) to help establish a hardware store in her hometown.

The URP is a partnership between the South African National Biodiversity Institute (SANBI), the uMgungundlovu District Municipality (uMDM) and CTAFS which aims to improve the resilience of smallholder farmers and the youth to climate change. Strategies include resilient agricultural practices and empowering the youth in the agribusiness sector in the areas of Swayimane, Nhlazuka and Vulindlela.

Noxolo and her sister Ms Nonzuzo Jila noted that most businesses in their hometown of Swayimane sold alcohol which they felt limited the progress and prosperity of the community. So, in 2019, the duo decided to open their own hardware store. Despite significant progress in promoting gender equality in South Africa, the Jila sisters were very aware that women were underrepresented in the hardware industry… but that did not deter them.

With the opening of the shop, the sisters’ aim was to help reduce the time and resources community members spent on travelling to buy building and agricultural supplies. Jila Hardware sells timber, poles, cement, paint and corrugated iron. It also stocks agricultural products such as herbicides, fertilisers, and animal feed.

The Jila sisters were inspired by their grandfather who ran a retail business that their father later took over. Noxolo completed her MSc in Agriculture at UKZN while Nonzuzo has a Diploma in Management and is currently studying through Unisa for her second qualification in Law.

The Jila sisters faced financial difficulties at the outset that made them think out of the box. They acquired some funding and with their savings added they established the shop using their father’s guidance and their own different skill sets and ideas as well as mutual encouragement and teamwork.

Noxolo’s internship with the URP involves identifying and recruiting youth community members in areas such as Swayimane who need assistance in their farming enterprises or agribusiness ventures. The URP provides training, workshops, mentorship, advisors, input and material supplies, and field and company visits as well as market access opportunities to boost business and farming enterprises.

The role of teamwork and adaptability that Noxolo learned through the URP has been vital in her business. She said working with young farmers demanded efficiency and a flexible attitude.

Despite some hostility from male hardware store owners, and beliefs in the community that a female-run business would fail, Noxolo and Nonzuzo remain focused and positive. Their vision is: ‘To build the nation with quality and affordable material; to supply and provide what the nation needs; believing that together, we can do better.’

They run their business from home to save on rent and transport costs and are fortunate that there is no competition in their area.

They hope to open two more hardware stores in the near future to increase job opportunities for the unemployed among the youth in rural areas.