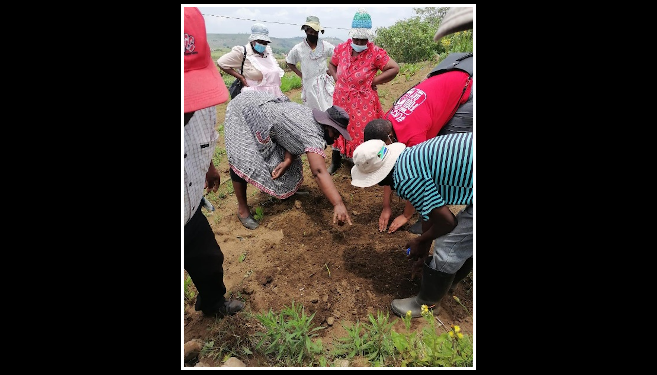 Farmers in Nhlazuka near Richmond receive training in growing ginger and garlic.

UKZN researchers working with smallholder farmers in KwaZulu-Natal to help improve resilience to the effects of climate change, have noted that the impact of the unrest in South Africa in July last year is still being felt in some rural areas.

The University’s Centre for Transformative Agricultural and Food Systems (CTAFS) is assisting the farmers through the uMngeni Resilience Project (URP), which aims to make the farmers more resilient through increasing their access to climate change information and associated services, implementing climate-smart agriculture to increase yield and diversity of crops produced and providing better access to markets.

Farmers involved have received support in growing crops such as beans, taro, maize, peppers and sweet potato and during the process researchers have observed how the impact of the unrest is still evident.

During the unrest in July last year, the food supply chain was seriously disrupted with wide-spread looting and damage to delivery trucks, retail centres, warehouses, industrial and distribution hubs, and food markets. Smallholder farmers were severely affected with the disruptions worsening their plight just as they had begun to recover from the economic problems caused by the COVID-19 pandemic. Supplies for small-scale farmers in KwaZulu-Natal became a major concern.

Farmers linked to the URP say they are still experiencing serious problems in getting supplies because of the destruction of and damage to rural retail outlets and the negative issues now caused by the need to travel longer distances.

UKZN researchers say the turnover of farmers is decreasing while their costs are increasing partly because of the long distances travelled to access markets. The decrease in customers was also associated with job losses caused by the looting.

Said Nhlazuka farmer Ms Thandi Dlamini: ‘After the looting which happened during COVID-19 lockdown restrictions, I had to travel long distances to buy my basic needs and today there are still supply problems… and now the community is buying less from us because of higher travelling costs.’

However, farmers were supplied with facilities by UKZN and the URP to store seeds and use organic farming methods where possible.

Researchers said the looting of Edendale Mall affected the profit margins of Vulindlela farmers. Before the unrest, farmers were able to sell their produce on the roadside or near the mall, earning them more than selling in their own communities. However, following training by UKZN and the URP, farmers were able to identify and sell at informal markets, such as near the Edendale Hospital.

The problems experienced because of the violence and the COVID-19 pandemic revealed the need to strengthen local food systems with short supply chains which had proved to be more resilient during a crisis. Farmers said assistance from UKZN and the URP which included the provision of inputs, advice, training and widening of market opportunities, had been ‘uplifting for them.’

Innovative approaches to problems included growing crops for which there was a high demand and a low supply, such as garlic and ginger. Training has given the farmers hope and direction with URP activities boosting their capacity to adapt to climate change, providing them with the confidence to approach markets and access government assistance.

Through its Learning Exchanges programme, the URP has also given farmers an opportunity to interact with colleagues in the industry and share knowledge.