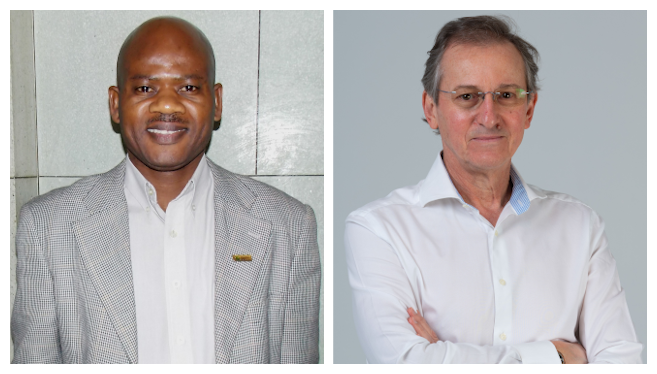 UKZN’s Professor Albert Modi, Deputy Vice-Chancellor of the College of Agriculture, Engineering and Science, and Professor Francesco Petruccione, South African Research Chair for Quantum Information Processing and Communication, have been elected as Fellows of the African Academy of Sciences (AAS).

Another 43 leading academics from across Africa also received the honour.

The prestigious life-long Fellowship - awarded following a rigorous peer review and voting process - recognises scholarly excellence and contributions to the advancement of scientific fields in Africa and globally. Fellows are assessed on criteria including their publication record, innovations, leadership roles and their contributions to policy and society.

Modi, who was recognised in the Agricultural and Nutritional Sciences category, has worked in academia since 1996, specialising in crop science. Originally from the Eastern Cape, he studied at the University of Fort Hare followed by the then University of Natal for his master’s degree, completing his PhD at Ohio State University in the United States under a Fulbright Scholarship. He worked as a Pioneer Hi-Bred International agronomist before joining the University of Natal where he progressed through the ranks to full professor, developing seed science and technology and sustainable agriculture curricula and serving as Dean and Head of the School of Agricultural, Earth and Environmental Sciences.

Focusing on development of human and research capital in agriculture through research and community outreach, Modi was the founding CEO of the Moses Kotane Institute, and also established the sustainable agriculture-focused Ezemvelo Farmers’ Organisation. At UKZN he launched the Centre for Transformative Agricultural and Food Systems to take university research to rural communities in order to achieve the Sustainable Development Goals and influence policy.

He is the recipient of a Water Research Commission Award for Human Capacity Development in Water and Science Sectors, an International Alumni Award from Ohio State University, and a recipient of UKZN’s Distinguished Teachers’ Award and Top 30 Researcher Award.

Registered with the South African Council for Natural Scientific Professions and with a C-rating from the National Research Foundation (NRF), Modi’s agronomy research focuses on sustainable agriculture, traditional and indigenous crops, the water-energy-food nexus, and building climate change resilience in rural farming communities.

Petruccione joined UKZN in 2004 as a Professor of Theoretical Physics, having studied at the University of Freiburg in Germany. He has held his research chair since 2007 and is also the interim director of the National Institute for Theoretical and Computational Sciences, Pro Vice-Chancellor Big Data and Informatics of UKZN and Professor Extraordinary in the Department of Physics of the Stellenbosch University.

Petruccione is an elected member of ASSAf, a Fellow of the Royal Society of South Africa and a Fellow of UKZN.

With over 250 publications, Petruccione’s quantum mechanics and quantum information processing research is focused on things at the minutest scale - he has contributed to the development of the theory of open quantum systems that forms the basis of quantum information technological applications. He has co-authored the following two highly-cited monographs that have been translated into other languages: The Theory of Open Quantum Systems, and Supervised Learning with Quantum Computers which had a second extended edition published in 2021.

He is also the editor of several proceedings volumes and of special editions of scientific journals, and a member of the Editorial Board of the Open Systems and Information Dynamics; Scientific Reports; and Quantum Machine Intelligence journals.

In quantum cryptography, Petruccione’s Quantum Research Group is advancing research into a quantum key distribution system, the realisation of which will result in the development of secure quantum devices.

The group has also worked on a project involving the development of a quantum network in the optical fibre network of the eThekwini Municipality. Their efforts are driving the establishment of a Quantum Information Processing and Communication industry in the country, supporting national initiatives and photonics and nanotechnology developments.