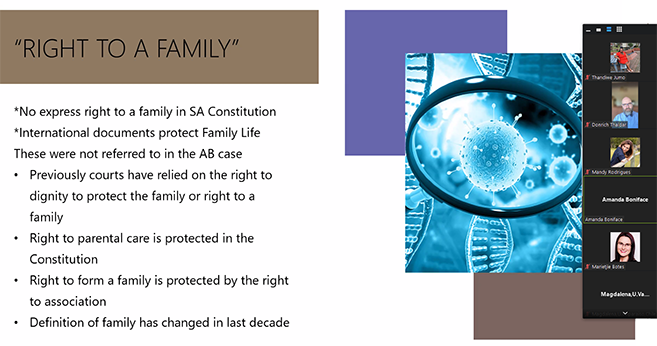 Is it time to reconsider the genetic link requirement for surrogacy? This was the question discussed by fertility law experts at an online workshop hosted by the School of Law’s Health Law and Ethics Research Interest Group.

In 2015, the Pretoria High Court in the case of AB ruled that section 294 of the Children’s Act - the genetic link requirement for surrogacy - is unconstitutional. However, a majority of the Constitutional Court disagreed, and it remained in the law books. Another constitutional challenge is currently being mounted against this section.

The aim of the workshop was to explore the relevance of the genetic link requirement in surrogacy agreements. To this end, the guest panellists discussed both the High Court and Constitutional Court judgment in the AB case, as well as outlined the issues of the current constitutional challenge in the KB case.

The discussion, which was facilitated by School of Law academic and research group leader Professor Donrich Thaldar, comprised of the following panellists:

•   Dr Carmel van Niekerk, a Law of Delict specialist, from the UWC’s Department of Law of Persons

Boniface presented a critical retrospection on the High Court phase of the AB case, where the focus was on the court’s interpretation of the concept of family. Although the right to a family is not explicit in our law, Boniface explained that the right to dignity has been interpreted to include this right. Her presentation focused on the High Court’s decision to declare section 294 unconstitutional by focusing on the offended rights of commissioning parents.

‘The basic reasons for the case were that it infringes human dignity; therefore, it is inconsistent with our Constitution. Legislation should recognise the advances in reproductive and fertility technology should redefine the traditional view of what a family is,’ stated Boniface.

The Constitutional Court judgment was analysed by van Niekerk who explored the minority and majority ruling in the AB case. The majority overturned the High Court decision and held that section 294 was constitutional. She critiqued the majority’s interpretation of the legal conception of family. ‘From the decision of the majority, it seems that this is still based predominantly on biology, and by adopting this approach what the court is effectively doing is that it is rejecting numerous family forms that exist despite biology,’ explained van Niekerk.

Edgcumbe introduced the facts of the KB case, which is the latest constitutional challenge to section 294. The applicant in this matter is arguing that the genetic link should be extended to include the possibility of a shared genetic link between the prospective child born of a surrogacy arrangement and any siblings. Edgcumbe explored the latest psychological evidence on the adjustment of children born via surrogacy and conceived using donor gametes, which raised important questions of what value should be placed on a genetic link. Shozi argued for a compromise solution where the courts are given powers to dispense of the genetic link requirement where good cause is shown. A poll conducted at the end of the workshop indicated that the majority of attendees were in agreement with this proposed solution.

Summarising the discussion and strategising the way forward, Slabbert asserted that it is necessary to look into the legal concept of family. ‘There should be more research from an African perspective on this issue. How is a family seen nationally and internationally, and how does the law see this?’