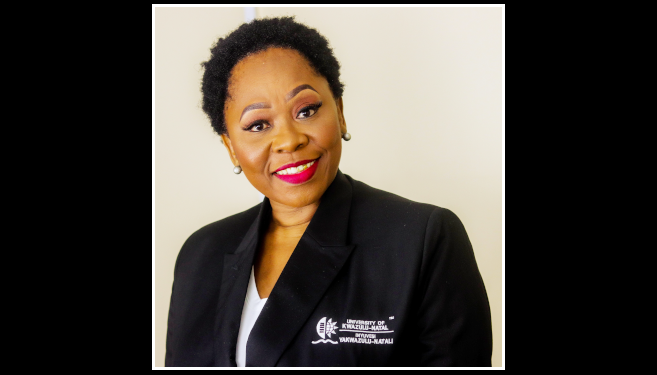 Ms Qhamo Gumede, founder and director of Men of Virtue at UKZN.

Men of Virtue Stand Against GBV

Launched just over a year ago, MOV aims to fight GBV, femicide, gender inequality and homophobia.

Its founder and director, Ms Qhamo Gumede, who is a Residence Life Coordinator for the Howard College and Medical School campuses and a Student Development Practitioner highlighted her struggles as a survivor of GBV and a victim of workplace inequality. As a social worker by profession, she said that men need to be at the forefront in addressing the root causes of this scourge. ‘Residences reflect the society we live in, which is why when I saw cases of GBV increasing I decided to make students aware of the University’s community standards and rules.’

Gumede added that high levels of intolerance among students of the lesbian, gay, bisexual, transgender, queer/questioning, intersex, asexual and more (LGBTQIA+) communities motivated her to form MOV. The movement operates on the principle that ‘it is easier to build strong children than to repair broken men.’ Gumede who works in the background said that the campaign is led by male staff and student leaders with the aim of mentoring high school learners, and first-year students all the way to graduation - producing a GBV free University.

With little to no funding, Gumede has been able to champion initiatives that are aligned with Vice-Chancellor and Principal, Professor Nana Poku’s notion of adopting a zero-tolerance approach to GBV on all campuses, including a Seminar on the Role of Women in Eradicating GBV and Femicide and the MOV Pledge.

MOV Deputy Chair and PhD student in Social Work, Mr Sethenjwa Nduli said that, as a queer Black person, he joined MOV to encourage more young men to accept themselves as they are and to challenge men’s negative views on LGBTQIA+ communities.

As a gender activist and Residence Assistant he recently attended the Presidential Summit on Gender-Based Violence and Femicide (GBVF) in Pretoria which reflected on the six pillars of the National Strategic Plan for GBVF. Nduli noted that President Cyril Ramaphosa encouraged men to get involved in programmes that address GBVF. He hopes to mobilise funding from the University and government for MOV’s various interventions.

MOV Chair and Student Development Officer for the College of Agriculture, Engineering and Science Mr Sanele Zuma remarked: ‘A lot could change in society if we as men, could have the courage to honestly reflect on our attitudes and behaviours. Such reflections would include acknowledging culture, tradition, gender privileges and toxic masculinities and discussing how they define and contribute to the scourge of GBV.’

Zuma added that denouncing GBV is not enough; interventions are needed to address why it happens which is MOV’s mission. He said that being part of this movement gives him a tremendous sense of fulfilment as he is able to educate young men on becoming better human beings.

Reflecting on how the MOV pledge inspired men from the Pius Langa Residence and the Medical School to take the same stand, he cited a lack of funding as one of the challenges confronting the programme. Noting how, ‘universities cannot be separated from the social ills found in society,’ he called on Higher Education Institutions to prioritise students’ holistic development.