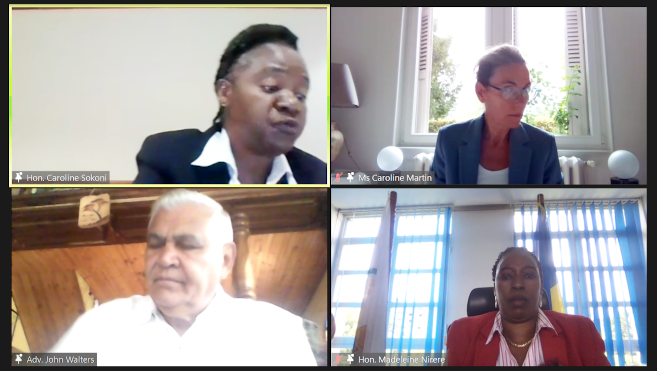 This day - first celebrated in 2018 - continues to be recognised every year on the second Thursday in October, transcending sector and political boundaries and highlighting the importance of work done by the Ombudsman across the globe. Goals of the day include educating the public about Ombudsman’s role and encouraging their programmes’ use while uniting the profession and connecting with communities.

The webinar also aimed to enhance the knowledge of the Ombudsman and staff about the United Nations (UN) Resolution, Venice Principles and the OR Tambo Declaration on Minimum Standards for an effective Ombudsman Institution.

Ombudsman of Wallonia and of the Wallonia-Brussels Federation in Belgium Mr Marc Bertrand; Venice Commission attorney, Ms Caroline Martin; and former Ombudsman of Namibia Mr John Walters discussed how the role of the Ombudsman could be strengthened, protected and promoted.

The UN resolution represents a strong endorsement of the key principles of Ombudsman institutions, including independence, objectivity, transparency, fairness, and impartiality. Bertrand reminded the Ombudsman and staff of the adopted resolutions identifying the role of the institutions in promoting and protecting human rights.

‘Reading them, one can see the will of the General Assembly to support Ombudsman institutions, and to encourage countries to take initiatives to strengthen them where they exist,’ he said.

Martin, who has been involved in adopting the Venice Principles by the Venice Commission, highlighted some of the 25 principles around the theme of the day and encouraged their use to promote and defend institutions.

‘They play a key role in protecting existing Ombudsman offices facing threats, providing guidelines for the improvement of current Ombudsman offices and setting a template for new offices where none is present.’

The webinar concluded with Walters speaking about the principles of the OR Tambo Declaration followed by a discussion on the four key principles.

‘Both government and the Ombudsman must keep these principles alive by complying fully with them. The principles of the UN Resolutions and the OR Tambo Declaration are not self-executing; they call on the state to act. Failure to act compromises the effectiveness of the Ombudsman,’ said Walters.