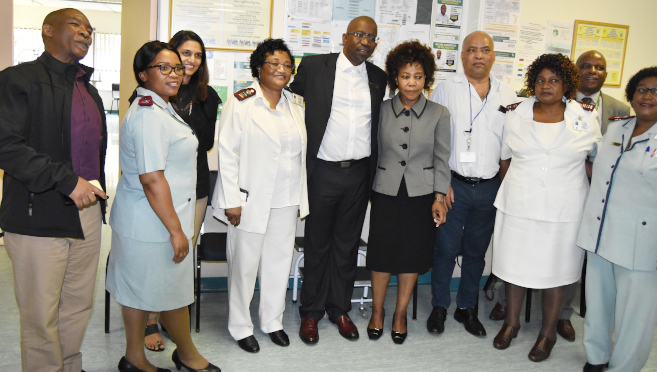 Madiba was not born with a silver spoon in his mouth but that didn’t stop him being ambitious. He achieved so much in life and my goal is to emulate him.

‘He was an excellent teacher and a mentor,’ said Buccimaza, who remembered Madiba as a trail-blazer and a staunch supporter of surgical research.

Madiba founded the Colorectal Unit which was officially named after him at an event attended by his family, former colleagues and representatives of the Department of Surgery’s Collateral Unit.

UKZN’s General Surgery HOD Dr Boitumelo Phakathi said: ‘Prof Madiba established the Colorectal Unit against all the odds, so naming it after him is truly a great honour and also ensures that his legacy lives on.’

Madiba was a Professor of Surgery at UKZN’s Nelson R. Mandela School of Medicine and the Head of the Colorectal Unit at the Albert Luthuli Hospital, and a Fellow of the College of Surgeons of South Africa and the American Society of Colon and Rectal Surgeons.

He had a distinguished career in research, took an active interest in research ethics and was the founder of the Colorectal Cancer and Stoma Support Group as well as the UKZN Surgical Society. He played an active role in the official structures of the University and the Medical School, contributing to policy and strategy formulation.

Madiba left a legacy of high-profile achievement despite the struggles of life under apartheid in South Africa, especially the institutional harshness suffered by those born outside the privilege of race and material comfort. Standing up to and overcoming several medical debilities that would floor many others, was an indication of his fortitude, resilience and determination. This doggedness was matched by his academic pursuit and the achievements that followed throughout his life.

In 1987, having attained a Fellowship in Surgery, Madiba was appointed as Consultant Surgeon/Lecturer at the King Edward VIII Hospital in Durban, launching a career as an academic surgeon that earned him warm recognition far and wide.

In 1996, he became the first Black KwaZulu-Natal (KZN) graduate to be awarded an Associated Professorship for academic excellence at the then University of Natal and was subsequently promoted to full professorship.

Madiba’s research achievements have been recognised by UKZN and the National Research Foundation. He has published extensively as reflected by the variety of book chapters, reviews, editorials and Forum articles he wrote. He had 113 peer-reviewed articles published and served as a reviewer for several international and national journals. When he retired in 2015, Madiba was a moderator for the Fellowship of the College of Surgeons (FCS) examinations held by the College of Surgeons of South Africa (CMSA).

An enthusiastic teacher, Madiba was awarded the Distinguished Teacher Award at UKZN in 2008 while further recognition of his academic status was provided when the eThekwini municipality awarded him Living Legend status in 2011 and UKZN awarded him Emeritus Professorship upon his retirement.

In addition to his interest in colorectal surgery, Madiba’s publications reflect a leaning towards general surgery.

Always well mannered, soft spoken with a measured tone, civil and professional in his functioning, Madiba displayed quiet authority. He played an active role in policy formulation and strategic planning during the re-structuring of the Medical School and pursuit of the transformation agenda.

Madiba’s achievements have been remarkable and inspirational to many.

Head of the Specialised Surgical Unit at IALCH, Mr Frank Anderson spoke fondly about his relationship with Madiba, ‘He was an architecture of his specialisation - I helped him with the building of the unit.’

Dr Sandile Tshabalala: HOD, Department of Health in KZN, said Madiba was a humble person. He recalled meeting him when he was CEO of Ngwelezana Hospital. ‘I asked him for a meeting and he called on me instead of me going to him!’

‘I am here to honour the greatest surgeon of all time,’ said Professor Thifhelimbilu Luvhengo of Wits University and Head of Surgery at the Charlotte Maxeke Johannesburg Academic Hospital. ‘I stopped everything to come here. I wish we could have just 10% of Madiba to help make sure this is a better South Africa,’ said Luvhengo.

Said an emotional Mrs Puseletso Madiba: ‘My husband taught us everything but not how to bear the pain when he left.