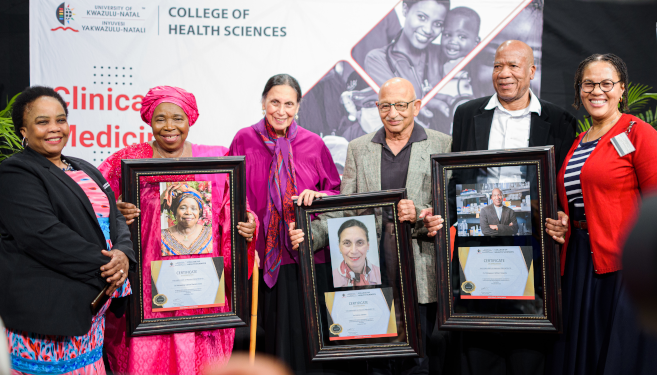 “On the Couch” with UKZN Living Legends

Who are UKZN Living Legends? They are alumni and friends of UKZN recognised and acknowledged in their living years for having made impactful contributions to better the lives of all South Africans through research, teaching, community engagement and policy development work.

These were the words of Professor Ncoza Dlova - Dean of the School of Clinical Medicine and creator of UKZN’s Living Legends awards - at the presentation of the accolades to the Minister of Cooperative Governance and Traditional Affairs (CoGTA) Dr Nkosazana Dlamini-Zuma, Emeritus Professor Malegapuru Makgoba and Emeritus Professor Miriam Adhikari.

Dlamini-Zuma, a medical doctor by profession hails from the town of Bulwer in the KwaZulu-Natal Midlands. She developed a passion for education being inspired by her father - a primary school teacher - who often expounded this maxim: Girls must have an education so they don’t remain in toxic relationships and should be financially independent.

‘Mum and dad also ensured that all my brothers were responsible at home, assisted with all the chores and also cooked. We grew up being taught that education is a great equaliser,’ said Dlamini-Zuma, who was inspired to study Medicine by Dr Sydney and Dr Emily Kark, founders of the Pholela Community Health Centre near Bulwer in the 1940s. The Karks initiated the first community-oriented primary care model and are widely recognised as one of the 20th century’s most original, inspirational and influential leaders in social medicine.

Said Dlamini-Zuma: ‘The couple taught us how to protect our water sources, grow vegetables and conduct outreach programmes at schools providing vaccinations. They had advanced ideas about preventative medicine and as a result, hospitalisation numbers decreased. They also created community waiting wards for women with complicated pregnancies and as a result maternal mortality rates decreased. I grew up in an environment in which the Karks encouraged children in the area to study Medicine.’

Dlamini-Zuma has served as national Minister of Health, Minister of International Relations and Cooperative Affairs, Minister of Home Affairs as well as Minister in the Presidency.

Makgoba, UKZN’s former Vice-Chancellor and Principal, thanked his parents for encouraging him to have a passion and love of learning so he could understand and enjoy the world. His message to Medical students in the audience was: ‘Learn your identity as a doctor during your training. Learn to also compete and be excellent. Above all else, ensure that you are driven to change the world - that goal that should be embedded in your ideals and vision during your life’s journey.’

Makgoba was the first Black Nuffield Dominion Fellow at the University of Oxford in England where he completed his DPhil degree in Human Immunogenetics in 1983, having graduated with a Medical degree from the then University of Natal. Makgoba and his team were among the first to appreciate the importance of lymphocyte adhesion and these observations have helped shape the evolution of the field.

Growing up in a rural area, Makgoba recalled as a seven-year-old boy catching birds by using a plant that stuck to their feathers preventing them from flying. ‘I used the same concept to identify a substance that would stick to molecules to understand lymphocyte adhesion. Our work achieved in 1988 has since been cited 23 000 times. The importance of antigen-nonspecific adhesion to T cell antigen-specific recognition laid the foundation for the understanding of immunology and immunopathology.’

Both Dlamini-Zuma and Makgoba thanked their former mentor, Emeritus Professor Edward Barry Adams - who was founding professor of Medicine at the Nelson R Mandela School of Medicine - for inspiring them and also paving a way for both to study at UK universities.

Adams is best remembered for instilling in his students an enduring recognition that acquisition of skills in eliciting and interpreting signs and symptoms was fundamental to good clinical practice.

Adhikari is an emeritus professor in Paediatrics at UKZN and a pioneer of neonatal training in KZN, involving the introduction of milk banks to prevent mother-to-child transmission of HIV as well as a member of the team which discovered tuberculosis in infants.

She was also recognised by the KZN Government for her contributions to teaching Nursing staff the importance of managing mothers and babies. Many of the systems she implemented between the 1980s and 2000s were a catalyst for the systems in use currently.

Dlamini-Zuma’s final words to doctors in the audience were: ‘Revolutionary doctors are needed in the world. A doctor heals one patient at a time but as a politician you can affect many lives through policy change. It is important to understand politics to understand your patients better as both are intertwined.’