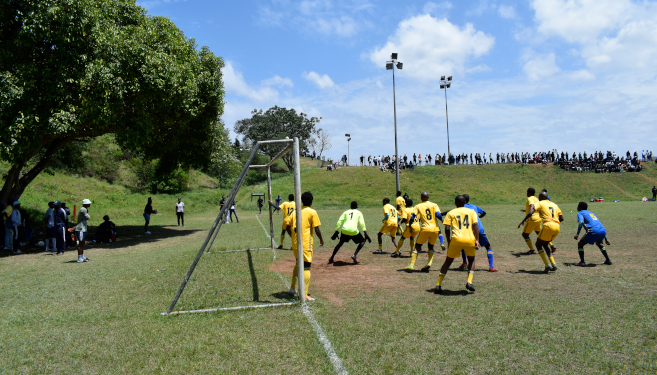 Soccer committees organise soccer leagues which mainly constitute of students residing in the University residences during the year and only the Top 4 teams from the leagues qualify to take part in the champions league at the end of the year. The competition allows young players to showcase their talent to football scouts who usually attend.

Mr Zwelithethindaba Sapula UKZN’s Sports Administration, who co-ordinated the tournament, said: ‘The aim of the tournament is to unearth talented players who may have not been seen during squad trials. We invited Golden Arrows and Tongaat representatives to scout for players on the day.’

Sapula congratulated the participating teams and their campuses for their commitment and dedication as they sponsored the tournament from residence league fees.

The men’s final was between John Bews (Howard College) and Pixley (Edgewood), with Pixley being crowned the 2022 UKZN League Champions.

A large crowd of supporters from all the campuses attended the action-packed day.

A special thanks went to the following people for their support: Corporate Relations, sports officers and head of departments for assisting in University processes, Finance Department, Department of Student Residences Affairs (DSRA) and Local Organising Committee (LOC) which was mainly the soccer committee members and the volunteers some of who were the newly appointed sport interns.

Sapula also thanked everyone involved for making the tournament a great success and commended spectators for their good behaviour.