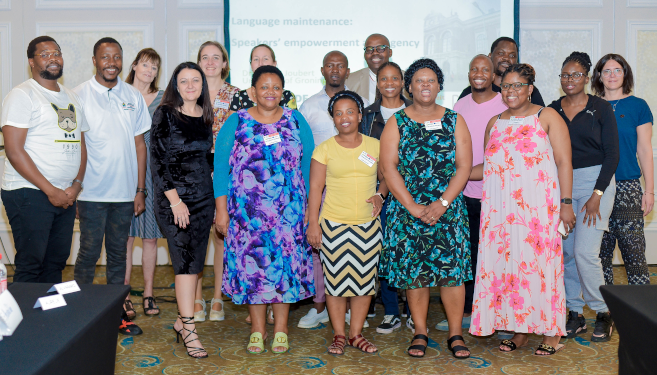 Learning in your language prioritised at the BAQONDE Summer School.

UKZN continues to collaborate with South African and European universities in promoting and facilitating the use of African languages as a medium of instruction in tertiary institutions through BAQONDE. BAQONDE (UKZN) is co-ordinated by Professor Nobuhle Hlongwa (Dean and Head of School: Arts), working together with Mr Khumbulani Mngadi (Director: University Language Planning and Development Office) as well as Dr Gugu Mazibuko (Academic Leader: African Languages, Linguistics and Development Modules).

UKZN hosted the BAQONDE Summer School 2022 at Southern Sun: Maharani Hotel as an exchange training programme among universities. During the training sessions, various participants shared implementational strategies for teaching and learning. The Summer School was a week-long conference with different discussions and presentations from national and international speakers on multilingual pedagogies.

BAQONDE has been an ongoing project since 2020, allowing academics from various disciplines to engage, through training and learning, in implementing and promoting the use of indigenous languages in their classrooms. Research has underlined the challenges and negative impact on the use of non-indigenous languages and its impact on students’ performance throughout their education.

The focus on the last training session was looking at universities’ role in promoting African languages, among other goals. ‘How can we as universities support the use and promotion of African Languages in Higher Education, develop material and mobilise it into technology?’ asked Hlongwa.

UKZN is currently working with Ambani Africa, a culture-centric and future facing technology company that specialises in educational courses teaching and promoting African languages and culture. Commenting on collaborating with UKZN, Ms Mukundi Lambani, Ambani Africa founder and CEO said: ‘There’s existing coursework that is on text and we were tasked with figuring out how to take it from text and pass it in a digital way. It’s not just taking something and putting it online as it is, we are really thinking about how this course lives online.’

Dr Tshikani Mabasa from the Department of Sport, Art and Culture (DSAC) spoke of the importance of developing, promoting and preserving languages through technology. As part of preserving languages, DSAC has launched the first dictionary written in English, Afrikaans and Khoekhoegowab and Ntsu languages which was also presented to the delegates. Khoisan and sign language are among languages to be promoted and preserved. ‘To ensure that indigenous languages are developed and taken care of, DSAC offers bursaries to students interested in studying these languages,’ said Mabasa.

BAQONDE workshops enable lecturers from different disciplines to engage and share different strategies and experiences of teaching using indigenous languages. Commenting on the project, UKZN senior lecturer and Academic Leader for African Languages, Linguistics and Developmental Modules in the School of Arts, Dr Gugu Mazibuko said: ‘BAQONDE is mainly about advancing the use of African languages in institutions of higher learning which is in line with the UKZN Language Policy and implementation plan.’

Hlongwa thanked all parties involved in the project throughout the summer school, adding that there is a possibility that it (the project) will be expanded.