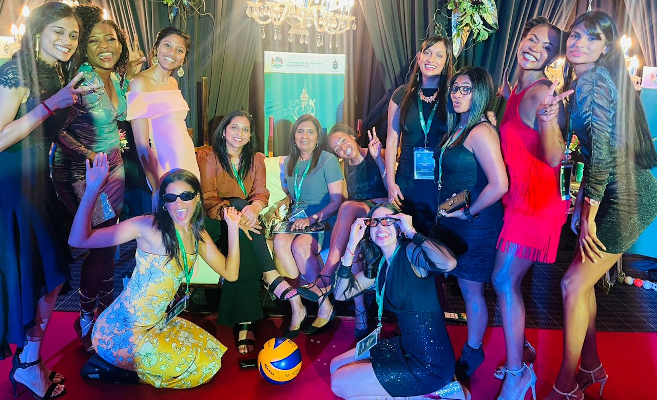 The UKZN Volleyball Women’s Team celebrate their achievements at the 2022 KZN Sport Awards.

UKZN Volleyball Team Jumps to the Top 3 in KZN

The UKZN Volleyball Women’s Team was a finalist in the 2022 KwaZulu-Natal (KZN) Sport Awards held at the Durban ICC in October.

The KZN Sport Awards recognise the top achievers in sport in the province in various categories. The UKZN Volleyball Women’s Team was nominated by KZN Volleyball (the provincial federation) for the category Team of the Year. They were amongst the top three sporting teams honoured at the gala dinner. Richards Bay Football Club was named Team of the Year, with Hollywood Bets Tuskers (Cricket) as another runner-up.

Team Captain and UKZN alumnus Ms Reyanka Kisten said the achievement was a dream come true. ‘To see how far this team has come and that all our hard work and commitment to the sport we love is being seen by others and recognised on such a high level is truly unbelievable. Even though we might not have won, to be recognised as one of the top three teams in KZN is a huge achievement.’

She said this was significant for the team and for the volleyball fraternity in the province. ‘This will mean that our team is taken more seriously in the world of sport in KZN. We always believed in ourselves but this nomination allows others to believe in us too. Hopefully, it will prompt people to think of volleyball in a different light and to invest in the sport we love.

‘This nomination is not just for those that are a part of the UKZN Volleyball Club now but for all those that have been part and parcel of this hard-working and thriving club. Without the history and growth of the club we would not be here today. I would like to thank everyone that has been a part of this club since its inception - this one is for you,’ she added.

UKZN Sports Manager Mr Mark Bashe paid tribute to the team for flying the UKZN flag high. ‘We are extremely proud of our women’s volleyball team that has achieved this prestigious nomination for this year’s awards, even though they did not win we are proud of them as they were up against two professional teams in this category,’ said Bashe.

‘The hard work put in by the coaching staff during the South African Volleyball Champs where they emerged as the champions of South Africa paid off. They will be representing the country at the upcoming Zone 6 championships to be held in Zambia in December,’ he said.

‘The department has put in a lot of effort into growing women’s sport and such accolades are a testament that if we have the necessary resources women’s sport will go far as we have seen in rugby, volleyball and football where our teams and athletes have achieved great heights.’

UKZN Senior Sport Officer Ms Roshnee Naicker applauded the team’s achievements. ‘To be a finalist in this category is a huge achievement, especially when selected alongside codes like football and cricket. This has been a golden year for this young team of women volleyball players and being a finalist was recognition of this.’

Naicker noted that the UKZN volleyball teams had had a cracker of a 2022, with the highlight being winning Gold at the VSA Club Champs and qualifying for the CAVB Zone 6 Club Champs in Lusaka, Zambia in December.

She also commended the team for excelling at the Aqua Darshan Premier League (ADPL), a volleyball league sanctioned and supported by Volleyball South Africa. ‘The final tournament of the series was held in October at the UKZN Westville Sports Centre where our Volleyball Women’s Team were crowned Champions of the ADPL 2022 series, achieving this undefeated through the series. The UKZN men took 2nd place in the ADPL Series.’