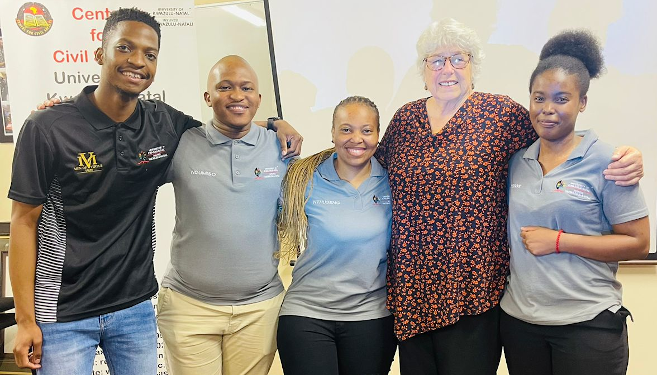 Should South Africa implement a permanent Basic Income Grant? Will the grant impact positively on poverty alleviation and reduce inequality? How will it be funded? What are the limits of welfare in a South African context?

These were among the questions addressed during a Young Civil Society Debate based on the implementation of the Social Relief of Distress COVID-19 grant to offset the effects of the pandemic on South Africa’s poorest citizens.

Hosted by the Centre for Civil Society (CCS) within UKZN’s School of Built Environment and Development Studies, the debate centred on the introduction of a permanent Basic Income Grant (BIG).

The debate was adjudicated by Professor Francie Lund, who chaired the Lund Committee which passed the provision of the Child Support Grant in South Africa.

The team supported the implementation of the basic income grant arguing that poverty and inequality were widespread in South Africa with 10% of the population owning 80% of the country’s wealth.

They felt the implementation of the grant could reduce poverty by 55%, thus improving the socio-economic situation in areas such as employment, education, health and fighting crime as well as combatting destitution. They also argued that according to Section 27 of the Constitution of South Africa everyone is entitled to social security and adequate social assistance if they were unable to sustain themselves and their dependents.

The team further argued that the grant allowed greater flexibility in the labour market for individuals to decide if they wanted to devote the funds to domestic labour, self-employment or other cultural activities. It further could stimulate the local economy through the multiplier effect and increase purchasing power through the heightened demand for goods and services.

The team argued a basic income support programme could be an effective strategy to safeguard the most vulnerable and give the transition a sense of justice. ‘Whether a person works or not, they should all have access to a small amount of money to cover their basic needs. Despite it being necessary to proceed cautiously, it is felt that a basic income hand-out will usher in a new era of progress and growth. This plan would take care of the necessities of the people, stimulate the economy, and lay the groundwork for tackling unemployment as we reshape our economy to a sustainable and inclusive future,’ they said.

They suggested that the implementation of the BIG would not make a difference to the alleviation of poverty and inequality as the amount proposed - about R624 - was insufficient to cover basic needs required for daily living.

They argued that if the grant was given to individuals the result would be that households with more family members would receive more money, defeating the aim of reducing inequality.

The team posited that the country could not afford the Basic Income Grant at this point as funding it would mean the possibility of having to take loans from the International Monetary Fund and the World Bank as happened with the COVID-19 Social Relief of Distress Grant.

Instead of implementing the BIG, the team argued the government should invest in the development of skills through public works programmes, and skills development such as the Presidential Employment Scheme and the overall creation of job opportunities.

‘This will not only mean the generation of revenue through VAT but also through PAYE. Finding a job tends to give people more of a sense of responsibility, rather than being dependent on the government.