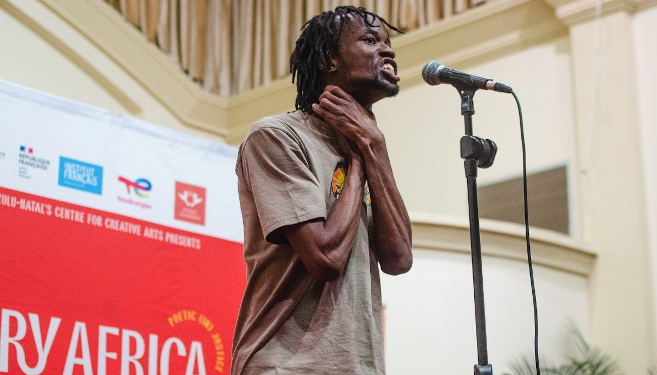 Nyembe, who won a cumulative prize of R22 000, will represent South Africa at the World Slam Poetry Competition in Brazil next year.

‘There is a lot more work to be done. But today, we celebrate an evening spent with the best poets the nation has to offer,’ he said at the announcement. ‘Gratitude to the Centre for Creative Arts (CCA) and UKZN for providing this platform for artists. South Africa has the best poets in the world, and I am grateful to Poetry Africa for reflecting on this established belief. I look forward to retaining the title next year in Brazil.’

CCA Director Dr Ismail Mahomed said: ‘Congratulations to Kwanele. The 2022 Poetry Africa was an incredible success, affirming its position as a most relevant platform that brings poets together from across the world to share, critique and celebrate each other’s creativity. At the same time, the festival is a barometer of how poets read and interpret our social, political and global conditions. Poetry Africa is a dynamic advocate for social justice.’

A jury member for Slam Jam and Head of World Poetry Slam, Dr Philip Meersman of Belgium, added: ‘The use of Kwanele’s voice, the deliberate delivery in (not) using the microphone, the audience interaction, restrained emotions, biblical references together with decorticating the human body into its essence with texts that were harsh as well as blaming and bringing people together, resulted in a well-deserved win.

'Kwanele is a true winner in every sense of the word, capturing and captivating his audience. He is a kind of magic that must be experienced live by the world.’

Nyembe is the co-founder of the Sink or Swim Podcast, a platform that serves as a media outlet for Durban-based performing artists to talk about their work and introduce the world to the people involved. As a performer he has worked with the Embassy of Sweden in Pretoria together with Hear my Voice, which curated a virtual series that incorporated creatives from different art sectors, including fashion, literature, music, the spoken word, media, government and academia, for co-learning and adapting to change and support during the peak of the pandemic.

He also performed at the Playhouse Sundowners Poetry and Jazz Show. Beyond this he has shared his work on various platforms such as Word N Sound and Worlds of Words.

He was a winner of UKZN’s Golden Key Poetry competition.