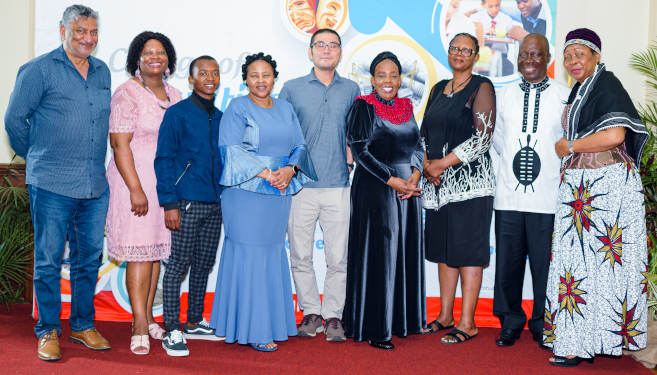 The College of Humanities and the Centre for Creative Arts (CCA) hosted the 2nd Mazisi Kunene Memorial Lecture during the 2022 Poetry Africa Festival.

Professor Mazisi Raymond Kunene, who died in 2006, was a UKZN alumnus, a freedom fighter, a poet and the first Poet Laureate of Africa.

Deputy Vice-Chancellor and Head of the College of Humanities Professor Nhlanhla Mkhize welcomed guests saying: ‘Kunene’s work has relevance beyond African literature and history. Through his interdisciplinary scholarship, he succeeded in articulating African philosophy, worldview, psychology, and international relations.

‘His work resonates well with the vision and mission of UKZN to entrench and normalise the use of African languages which is why we are continuing, in collaboration with the Mazisi Kunene Foundation, to advance the scholarly work of Professor Kunene,’ said Mkhize.

The lecture explored the ideas of Kunene in four areas: the Nguni family, religion, the knowledge enterprise, and land politics from an African philosophical perspective. The discourse advances the standpoint found in almost all of Kunene’s work - the preservation of Africa’s own ideas and knowledge.

Motsa-Madikane explained how Kunene preached the notion that Africa’s heritage was never lost, hence Emasisweni Kusekhaya, and that ‘as Africans we just need to uncover that which has collected dust during the years of colonial hegemony.

‘I chose the title based on the encomium Mazibuye Emasisweni - to underscore the main thesis of this discussion - fundamentally, I align myself with Kunene’s position that Africa has not totally lost her cultural, scientific, religious, and linguistic heritage. It is here with us and not emasisweni,’ said Motsa.

Executive Managing Trustee of the Mazisi Kunene Foundation, Kunene’s widow, Mrs Mathabo Kunene, thanked College academics not only for the memorial lecture but their contribution in editing her late husband’s Unodumehlezi KaMenzi which she describes as amazing because through it she is able to keep the promise she made to him of looking after his manuscripts and keeping his work alive.

She spoke of her frustration at how 16 years after her husband’s passing, the foundation was still battling to get his work into the South African syllabus. ‘Why aren’t books - not just those of Kunene but all African writers - a priority in the South African curriculum?’

The event included a message of support from the Director of the Centre for Creative Arts, Dr Ismail Mahomed; the Executive Director of Gcinamasiko Arts and Heritage Trust, Dr Gcina Mhlophe; a student Mr Sisanda Shozi; and Postdoctoral Fellow, Japan Society for the Promotion of Science, Professor Tomohiro Kambayashi-Ueda.

Also at the event were 60 Grade 11 learners from the Hluzingqondo High School in Amahlongwa where Kunene grew up, was schooled and now rests.