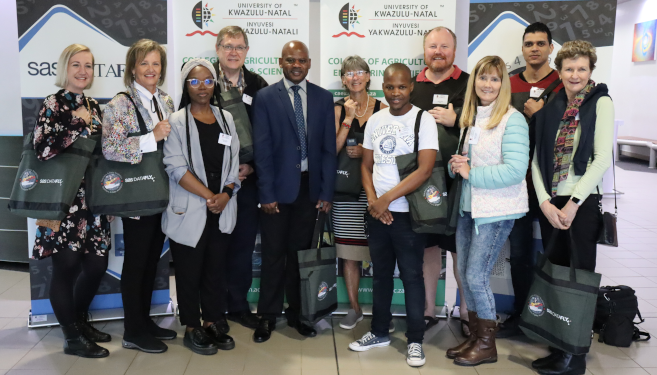 ‘UKZN is very well respected nationally and internationally with regard to providing cutting-edge training for the data age!’

These are the words of UKZN Statistician and former Dean and Head of the School of Mathematics, Statistics and Computer Science, Professor Delia North, who is passionate about upskilling young South Africans. Data analytics in particular is her thing.

With North at the helm, UKZN has partnered with global analytics leader SAS (the world’s largest privately-owned software company) and two other South African universities to launch her brainchild, the Teachers4DataAnalytics programme. This programme is a teacher training initiative that aims to reach hundreds of teachers and provide them with the knowledge and tools to inspire their students to pursue careers in data analytics.

‘I want to bring data to life in South African classrooms,’ she said.

North has been highly influential in statistics education in South Africa for close to two decades and has played a seminal role in defining the statistics content of the school curriculum since it was first introduced in 2002.

Under her guidance, UKZN has introduced a suite of Data Science qualifications including a BSc degree, a postgraduate diploma and a master’s programme. The University is rapidly being recognised in the industry as the place to go to study and plan for a career in data analytics as all its offerings are fully SAS endorsed.

North pointed out that despite one-third of South African university graduates and almost 60% of the youth failing to find jobs and meaningful employment, a massive skills shortage in the technical sectors persists. With economies digitalising rapidly, creating roles for entrants with data analytics and statistical skills, North became increasingly concerned that school learners locally were largely unaware of the existing and emerging potential vocations that can offer them exciting and gainful employment opportunities and future-proofed career paths. She reached out to SAS, and the rest - as they say - is history.

Mr Andre Zitzke, Manager: Global Academic Programmes in Africa for SAS and a close colleague of North said: ‘We are exceptionally proud of and excited about the Teachers4DataAnalytics programme as this is the first programme of this nature, scale and size focused on secondary school teachers and learners in South Africa.

‘The aim is to empower teachers with the knowledge and tools to be better placed to reach more students, encourage their curiosity and provide them with exposure on practical applications behind the curricula in STEM subjects, so that learners become more informed on the careers available to them in the digital and data driven age.’

For the Teachers4DataAnalytics programme, North invited Professor Christine Franklin, a world-renowned expert and leader in teacher training, to optimise the uptake of statistical concepts at school level and produce a booklet that would guide teachers in their training. SAS® DataFly was the software of choice as innovative use of this versatile software allows teachers to use SAS DataFly despite constraints and realities of teaching in less affluent schools.

Having been launched at UKZN on 13 August to enthusiastic acclaim by local teachers, North and SAS are now taking the programme to the Universities of the Western Cape and North-West to train local teachers in those provinces.

North’s long-term vision is to expand the project across the continent to help connect schools, universities, industry and government in creating a data analytics talent pipeline for a digital future. Feedback on this cross-Africa initiative will be shared at the World Statistics Congress in Ottawa, Canada in July 2023.

‘Any initiative that exposes learners to the enhancement of career opportunities in line with the needs of the modern workplace should be pursued with great focus. Teachers are “change agents” who can have a fundamental influence in this regard,’ she said.

North is no stranger to running outreach projects that advocate awareness for studying STEM - and data analytics - in particular. Her hugely successful Women in Analytics and Dudes in Data initiatives aimed at Grade 11 school learners have led to a rapid uptake of high-quality data science students at UKZN.

‘We have shown our feeder school pupils that data is everywhere and top-class training is available right here in their backyard!’

Said North: ‘STEM provides graduates with elevated employment opportunities. Having top-end data analytics skills during the 4th Industrial Revolution gives them a huge advantage. With our specialised data science degrees and brilliant and dedicated faculty, UKZN is the place to be!’