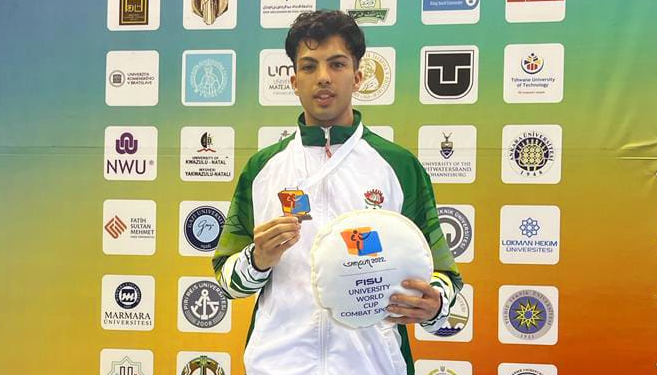 Ghoor - who participated as an individual in the Kumite 75kg category and as part of team South Africa which won bronze - said: ‘This is honestly a huge achievement as the South African Karate team has not received a medal for the past 15 years. I hope to continue winning medals, Inshallah, and to make my country proud.’

Ghoor started his karate journey at the age of four, inspired by his father who introduced him to the sport and motivated him to pursue it further. With over 19 years’ worth of experience, Ghoor is now on his third Dan black belt, which he credits to his father, Mr Ahmed Ghoor. ‘All my training is prepared by my dad who is also my coach and I owe all my achievements and success in karate to his guidance, strategies and knowledge,’ he said.

Ghoor began his preparations for this competition over a year ago and qualified for the University Sports South Africa (USSA) karate trials which were held in July this year. He noted the intensity of his training sessions which take place twice a day from Monday to Friday and include sparring, speed, strength and plyometric training.

As a Prestigious Sports Scholarship recipient, he thanked the University for sponsoring his trip to the World Combat Games and allowing him to make his Institution proud. ‘I am very honoured to be a part of UKZN as I was only able to achieve this and bring the bronze medal home because of the University’s support and belief in me. Thank you UKZN!’

Although Ghoor, who was focused on the tournament, did not get a chance at sightseeing during his 10-day stay in Turkey, he did get to enjoy some baklava and turkish delight.

His plans for the future include completing his qualification as a chartered accountant and winning a gold medal at the World Karate Federation - being the first ever South African to hold the title.