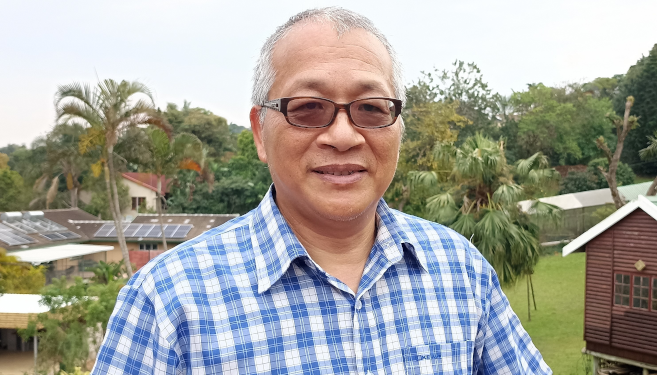 UKZN’s Professor Johnson Lin is fascinated with the little things.

As a microbiologist, his main focus of research is on environmental microbiology and bioremediation, and he used the occasion of his inaugural lecture to share his insights into this area.

‘Advancement in science and biotechnology have progressively aided mankind through exploration and use of natural resources,’ said Lin. ‘Unfortunately, some of these interventions may instigate environmental effects which impact human health.’

In recent years, molecular techniques have been utilised in exploring the potential applications of microbial enzymes. Lin explained that natural bioremediation is an ecologically sound tool that encompasses the usage of biological processes to reduce or remove pollutants through biochemical solubilisation or mineralisation, thus contributing to saving the environment.

‘Combinations of advantaged molecular techniques, molecular modelling together with artificial intelligence potentiates bioremediation for commercialisation and environmental health that can be demonstrated in plastic degradation,’ he said.

Lin is a full professor at UKZN’s Discipline of Microbiology which is housed within the School of Life Sciences (College of Agriculture, Engineering and Science).

He received his BSc degree from the National Tsing Hua University of Taiwan in 1984 and his PhD in 1992 under the supervision of Einstein Professor J H Wang from the State University of New York, Buffalo, USA.

Lin underwent postdoctoral training on the structure and function of the reverse transcriptase of HIV-1, under Professor J Coleman in the Department of Molecular Biophysics and Biochemistry at Yale University, before moving to South Africa in 1995 and joining the then University of Durban-Westville (now UKZN) as a senior researcher in June 1996.

He is an editor-in-chief of the African Journal of Biochemistry Research from 2007, a member of the Editorial Board of Water SA, and a member of the Advisory Board of the International Journal of Biotechnology since 2013. He is a reviewer for more than 20 high-impact factor journals and has served as a member of the Scientific Committee of the Euro-Mediterranean Conference for Environmental Integration for several years. He constantly reviews funding proposals or rating applications for the National Research Foundation (NRF), Water Research Council (WRC) and Medical Research Council (MRC).

Lin has been an invited speaker at several international conferences in the United States, Singapore, Taiwan and South Africa. He was a visiting scholar at the Institute of Biological Chemistry, Taipei, Taiwan, in 2010 and was appointed as an Adjunct Professor at the Jiangsu Academy of Agricultural Sciences, China, from 2015 to 2020.