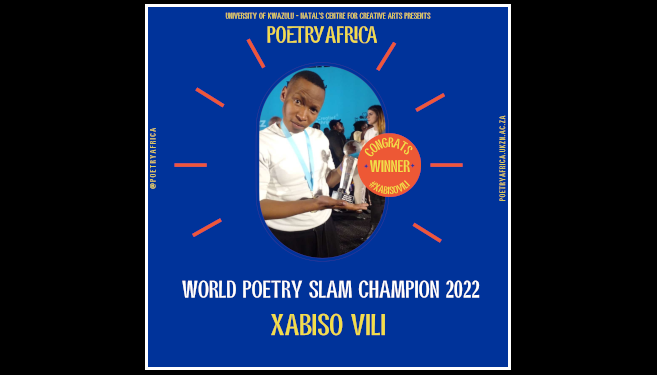 The Centre for Creative Arts (CCA) within the College of Humanities has proudly announced that Mr Xabiso Vili is the 2022 World Slam Poetry Champion for his poem Forget How To Die.

He was selected to represent South Africa in the World Poetry Slam Championship in Brussels, competing against slam poets from 40 nations across the globe.

Vili said that the award was not only his, but ‘belonged to all the slammers in the tournament that grew enormously during the time spent together.’

CCA Director Dr Ismail Mahomed added, ‘At the Centre for Creative Arts, we are incredibly proud of Xabiso’s achievement. He positions South African slam poets and the Poetry Africa Festival at the forefront on global stages. Xabiso represents a generation of young South African slam poets who actively use their voices to advocate for a more just social order. We are also proud of the advocacy work done by Poetry Africa curator Siphindile Hlongwa, to position the Poetry Africa Festival on the global stage.’

Vili is a multi-award-winning performer, writer, new media artist, producer and social activist. He strongly believes that art offers humanity a path towards integration, joy and healing. He works to create alternative spaces for art to be shared in an innovative way. Vili is researching and creating a methodology to use writing as a tool for therapy. He is a champion of multiple slams, has been published in various anthologies and has performed on four continents. He has also worked with abandoned spaces and converted them into art hubs.

Vili has released an album, a one-person show, and a poetry collection, and co-authored a young adult novella. He created an artificial reality poetry-audio-visual project that was exhibited in Paris in June 2021, along with a projection mapping installation.

His win comes shortly after he was announced as the New Generations Featured Poet at the 26th Poetry Africa Festival. Vili will perform as part of the festival in Johannesburg, Durban and online.