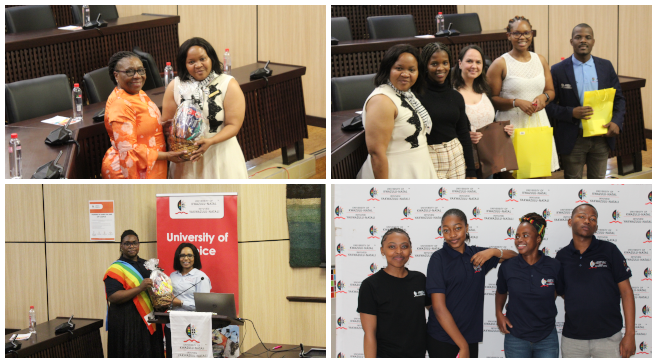 Scenes from the SRHR Indaba.

The live event hosted on the Westville campus was attended by staff and students and streamed live to more than 300 participants on YouTube.

Welcoming the speakers, guests and participants, programme director and Interim Executive Director for SSD, Professor Ntombifikile Mazibuko said the Indaba hoped to create awareness of the positive consequences of knowing one’s status while engaging constructively and critically on the diverse aspects of sexual reproductive health and rights. She highlighted how the Indaba would allow presenters to share their personal stories, work experience and scientific inputs which would lead to vibrant discussions and reflections.

SRC President, Mr Malusi Zuma said it was important for students to use SRHR and mental health services so as to graduate healthy and happy. He also noted the importance of financial stability and urged the University to redouble its efforts to ensure food security.

Ms Thuthukile Mbatha of the AIDS Rights Alliance of Southern Africa (ARASA) highlighted the importance of SRHR in protecting and educating women on their right to bodily autonomy.

Medical student and peer educator, Mr Nqobizwe Mahlangu focused on the impact of social entrepreneurship in addressing SRHR. His business, Softy Care, donates a pack of pads to a girl in need with every purchase and he remarked that period poverty could be abolished if every company were to follow suit.

Final-year Medical student and peer educator, Mr Thabo Langa called for the issues faced by the lesbian, gay, bisexual, transgender, queer and intersex (LGBTQI+) community in accessing public healthcare services in South Africa to be addressed: ‘Our job as healthcare workers is to provide services without prejudice and discrimination because no one should be left behind.’

Langa also introduced the Queer in Medicine Campaign, an initiative that prioritises sexual and reproductive healthcare for all gender identities, expressions and sexualities.

Adolescent Girls and Young Women (AGYW) Champion, Ms Ayabulela Nyawose focused on Section 27 of the South African Constitution which states that everyone has the right to access healthcare services, including reproductive healthcare. She added that the challenges in accessing SRHR include judgement, scarcity or shortages of medical supplies, and a lack of information on contraceptives including post-exposure prophylaxis (PEP) and pre-exposure prophylaxis (PrEP).

Educational Psychologist in the College of Health Sciences, Ms Suzanne Stokes called on people to create safe spaces at home to open up about love, sex and reproductive health. She commented on the factors such as family, connectedness, culture and beliefs etc, which all contribute to a student’s mental and sexual health. Stokes noted the benefits of nurturing relationships but called on the youth to set intimacy boundaries before engaging in risky behaviour as well as to practice self-love and self-care.

Head of Discipline: Obstetrics and Gynaecology Professor Motshedisi Sebitloane outlined the anatomy of a woman’s sexual reproductive system. She covered menstrual cycles, sexually transmitted infections (STIs), and conditions such as ovarian cysts, fibroids and endometriosis. Focusing on best practices for students she encouraged them to abstain, limit the number of sexual partners, always use a condom to prevent STIs and unwanted pregnancy, to use hormonal oral contraceptive pills if possible, have regular pap smears and conduct regular self-breast examinations.

Howard College clinic nurse, Sister Sinazo Sobekwa noted the importance of family planning and the type of contraceptives offered on campus. The clinic also offers pregnancy tests and referrals to antenatal clinics as well as termination of pregnancy facilities. Commenting on the importance of students coming in with their partners for HIV testing and STI treatment, she said her department is open and free from judgement.

CEO of the Soul City Institute for Social Justice, Ms Phinah Kodisang addressed SRHR in relation to positive living. Reflecting on her personal experience of being a teen mom due to her then partner’s act of stealthing, she noted the importance of consent and what it entails. She urged women to engage in sex as an act of “pleasure” rather than one to be enjoyed by men or used for procreation. Kodisang added that people need to be taught about sex from a young age so as to be aware of their rights.

Highlighting the stigma associated with HIV and AIDS, she stressed the importance of reaching out to students who test regularly for HIV by providing mental health support as they might be dealing with psychological issues that make them engage in risky behaviour. She noted that behavioural change is not a linear but rather a holistic approach, and emphasised the need to address toxic masculinity.

UKZN’s HIV Counsellor, Ms Pinky Mnyaka thanked the speakers and said: ‘We look forward to working with you in the future and hope that our peer educators - as the backbone of the programme - will take the information given to them and help students live better lives.’ She extended her thanks to Mazibuko and her team for hosting the event and all those who attended.

Q and A sessions were held throughout the programme.