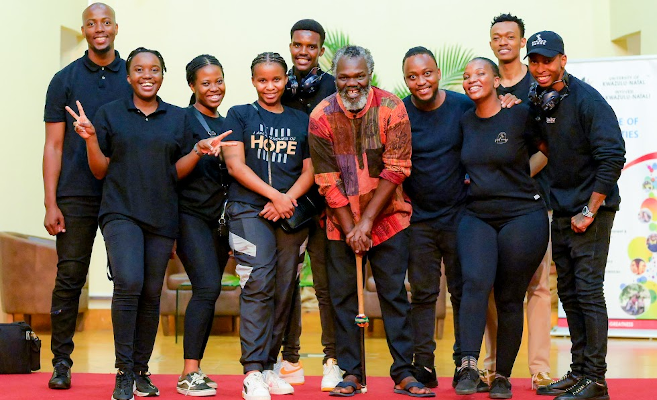 Honours students in Film and Media Studies (School of Arts) hosted, filmed, and live-streamed an event at the Howard College Theatre to celebrate language and culture focusing on isiZulu under the guidance of Video Production lecturer, Mr Mzwandile Makhanya.

Makhanya said that the event was technical and practice-orientated and part of the larger goal of producing graduates who excel as new professionals. ‘Our students are continuously involved in similar projects. They were also part of the UKZN Spring Graduation video production team. We try to open employment and entrepreneurial opportunities for students where they earn an income for these events.’

In her welcome address, Dean and Head of the School of Arts, Professor Nobuhle Hlongwa said, ‘Thank you to everyone who made this possible. Appreciation to the lecturers of Media and Cultural Studies for the great initiative and for working together for the greater good of students.’

Hlongwa noted that, by developing students across KwaZulu-Natal, the Centre for Creative Arts (CCA), KwaZulu-Natal Film Commission and the National Film and Video Foundation are contributing to the growth of the province’s film and TV industry. ‘We are hopeful that the work produced by our film students will eventually find a home at international level,’ she said.

The event included a panel discussion that explored the isiZulu language and culture in a modern setting, with a focus on UKZN’s role as its custodian.

Hlongwa spoke on the role of Higher Education Institutions in ensuring the development of isiZulu and other indigenous African languages. Cluster Leader for Performing Arts Professor Sihawukele Ngubane addressed the importance of culture and tradition, and Cluster Leader for African Languages Dr Gugulethu Mazibuko discussed the history of the Zulu royal chieftaincy.

Speaking on behalf of the 2022 Honours class, Ms Nkosazana Manzi said the event was inspired by the need for more African language content creation and preservation. ‘The theme Azibuyele Emasisweni (going back to our roots) reminds us of the importance of where we come from so that we do not lose our true selves in the modern world. We are grateful for the opportunity to host such a large-scale event. The skills learnt will be useful for our working life.’

The event closed with a musical performance by award-winning musician Mr Mbuso Khoza and the Afrikan Heritage Ensemble, who aim to teach the modern generation about their ancestors through traditional song and dance.