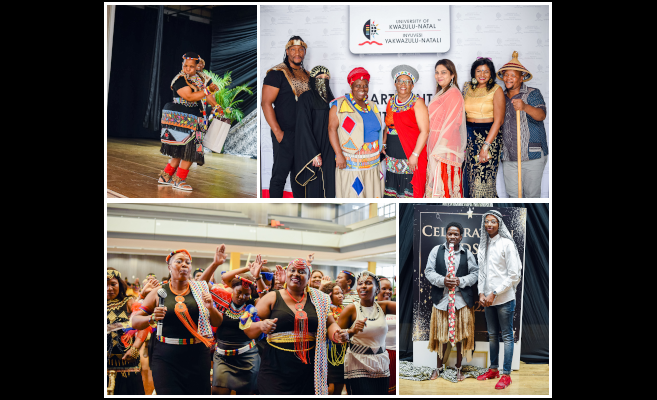 DSRA Closes Off Heritage Month with a Bang

In his welcome address Mr Sibusiso Khumalo the Head of the DSRA for the Westville and Edgewood campuses, highlighted the impact of the COVID-19 pandemic. He noted that while it disrupted lives, it also taught people to be technologically savvy.

Reflecting on the hardships endured during the pandemic, as well as the looting and flooding in KwaZulu-Natal, participants observed a moment of silence for all those who had lost their lives, their loved ones and their livelihoods.

Chanting her praise names, DSRA Interim Director Ms Sisanda Machi shared her family lineage and heritage and remarked that she carries it everywhere she goes and that it has shaped who she is today.

Machi recalled the history of Heritage Day, which was originally called Shaka’s Day to commemorate the Zulu King’s death. ‘This is a day to be proud of ourselves and to celebrate our heritage, where we come from, what we have achieved and our future. Today is about coming together as one, and growing and learning from each other in order to contribute to a united South Africa,’ she said.

The highlight of the day was a traditional song and dance competition, with the Westville campus walking away with first place, Howard College campus second, Edgewood campus third and Pietermaritzburg campus fourth.

Best Traditionally Dressed in the male category went to Mr Kusakusa Mpungose from the Howard College campus who was adorned in ibheshu, a loincloth. Ms Thule Mkhize from the Pietermaritzburg campus who won best dressed in the female category with her isidwaba, a traditional leather skirt for married women, remarked that the event inspired employees to be proud of their heritage and to stand together as one.

Head of the DSRA on the Howard College and Medical School campuses, Mr Nhlanhla Mthombeni hosted a Know Your Heritage Quiz.

In closing, Head of the DRSA on the Pietermaritzburg campus, Mr Mdukhy Mabaso congratulated the winners and thanked Machi as well as Ms Priscilla Cele, executive personal assistant in the Student Services Division for putting the event together.