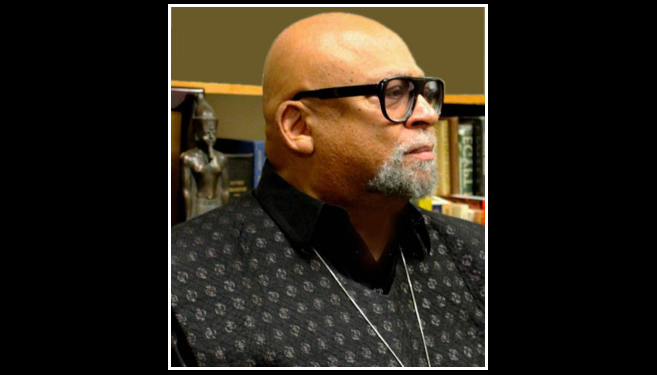 The Humanities and Ma’at Institutes within the College of Humanities hosted a virtual Public Lecture by Professor Maulana Karenga on Ma’at, Serudj Ta and African Renaissance.

The African American scholar-activist, author, professor and chair of the Department of Africana Studies at California State University is also the creator of Kwanzaa, an African American and Pan-African holiday celebrated by the global African community. Karenga was hosted by Professor Nhlanhla Mkhize, Deputy Vice-Chancellor and Head of the College and the lecture was facilitated by Professor Johannes Smit, Chair of the Humanities Institute.

Karenga examined ‘the ancient Egyptian ethical tradition of Ma’at, rightness in the world, and the concept of serudj ta, the ethical imperative to repair, renew and remake the world.’ He drew on the critical practice of sankofa to retrieve and reconstruct the Ma’atian tradition and to demonstrate its value in conceptualising an African renaissance and critically engaging the major issues of our time.

His approach to restoring the Ma’atian tradition is based on his philosophy of Kawaida (a Swahili word meaning “tradition and reason”), from which he created the Pan-African holiday Kwanzaa, a celebration of family, community and culture, and the Nguzo Saba, the seven principles around which the holiday revolves.

This has become a significant value system for African communities around the world. Karenga examined communitarian African values and Ma’atian principles and practices as well as Kawaida philosophy which he characterised as ‘Afrocentric; critical and corrective; a sankofa initiative; a privileging of Africa as a moral ideal; and an open textured process and practice.’

He added that serudj ta requires daily acts of goodness in and for the world. As the Husia, the sacred text of ancient Egypt, teaches, ‘Every day is a donation to eternity and even one hour is a contribution to the future. Given the Ma’atian conception of the interrelatedness of the Divine, the natural and the social, these good deeds, this doing of good in and for the world, are not only physical acts, but also moral and spiritual ones of repairing, renewing and remaking the world. In modern Kawaida Ma’atian ethics, it is put forth as an ethical imperative to repair, renew and remake our relations, society and the world in the interests of African and human good and the well-being of the world. In a word, it is an ongoing moral, social and ecological or environmental practice.’

Karenga highlighted that ‘a true and effective global African Renaissance must be culturally-grounded, people-focused, dignity-affirming, life-enhancing and world-preserving. This requires deep, comprehensive and continuous dialogue with African culture and an ongoing synthesis of the best of African sensitivities, thought and practice - ancient and modern, continental and diaspora - in a mutually beneficial exchange with the world. Furthermore, these initiatives must and will be constantly directed toward substantive and sustained African and human good and the well-being of the world and all in it.’

In closing, Karenga asserted that, ‘There is no hope or possibility for the development of Africa as a continent and world community without the self-conscious and active engagement of its people to harness its resources and to free and develop itself. This requires a project of renaissance that is not only designed for the development and satisfaction of basic human needs, but also embraces ways and means for the people to transform themselves and in the process, become self-conscious agents of their own life and liberation, creating conditions for their flourishing and coming into the fullness of themselves.

‘We must begin by building ourselves, our families, our communities, and all our essential relationships as sites and sources of mutual respect, genuine caring, reciprocal support and shared goods of all kinds. Together, in small and large circles, we must develop not only ways to repair, renew and rebuild our relations with each other, but also to strengthen and expand our capacity to achieve full freedom, real justice, and a good and meaningful life.’