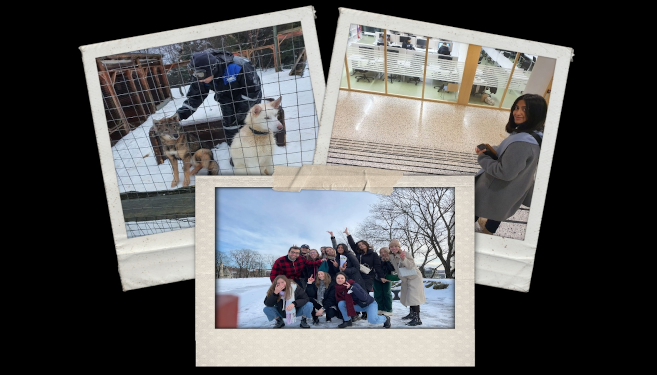 Third-year LLB student Ms Layyah Kharwa spent six months at the University of Oslo in Norway which is more than 200 years old and considered one of the leading universities in Europe.

Kharwa (20) believes her time spent in Oslo will stand her in good stead when she joins the legal fraternity. ‘Having taken an Artificial Intelligence and the Law module whilst abroad, and being exposed to a bit of coding, I am quite keen to explore the area of legal technology a lot more,’ she said.

She hopes to spend time at a firm specialising in that field to develop her knowledge from a practical perspective.

Kharwa says she discovered that studying overseas is not just about academic work - it is also an opportunity to explore other cultures and gain an international perspective while earning credits for your degree.

Highlights from her trip include seeing the northern lights - an atmospheric phenomenon of spectacular, dancing waves of light. She also went ‘husky sledding, tried cold plunging into 5degC water, and experienced my first snowfall’.

‘Additionally, I got to travel to Sweden and Denmark and experienced the Holy month of Ramadan in London with my family who I hadn’t seen since the pandemic,’ she said. ‘Eid in Norway was beautiful. My Norwegian-Pakistani friend, Ms Alihah Amin, invited me to spend the night before with her family at their local mosque where we had a lovely meal and applied mendhi,’ said Kharwa. She also enjoyed ‘kitchen party’ hang-outs with fellow exchange students.

One of the things she misses most about the city is Oslo’s local library where she spent many an evening studying. ‘This library was architecturally beautiful, cosy, and had amazing views of the Opera house and fjord. It was also kitted out with top of the range technology such as 3D-printers, laser-cutting machines, and gaming PCs as well as movie booths and musical instruments, all of which were free to use,’ she said.

Communicating was very easy as most Norwegians speak English fluently, but she did rely on a bit of Afrikaans and Google Translate when she needed to! ‘Norwegian has a bit of Dutch influence so my school Afrikaans helped a little - at least for the important words like sjokolade! The only time that I was really exposed to the country though was at grocery stores and while perusing restaurant menus where Google Translate really came in handy - although most restaurants have an English menu as well.’

Kharwa was proud to represent the University abroad as her family has a long history with UKZN. ‘Both of my parents are pharmacists graduated from UKZN - my father holds a BPharm and mother has a BPharm and PhD from the University. My uncle and aunts (MBChBs and Bcom), and grandfather (BSc and PhD), are all proud UKZN graduates,’ she said. ‘My grandfather, Professor Ahmed Thandar is Professor Emeritus in the Department of Zoology and was recognised as the University’s longest serving academic,’ she said.

Kharwa, who matriculated from Westville Girls High School in 2019, thanked her parents Mohamed and Yasmeen and two younger brothers, Umar and Husain, for being supportive throughout her studies and travels.

In her spare time, Kharwa enjoys keeping up with current affairs, reading and watching movies. ‘I have a broad range of interests that seem to be ever changing, however, having travelled extensively through the years, I have developed an interest in both international and local current affairs which has nurtured my belief in fairness, justice, and women’s rights. But like many, I am still a movie fanatic and enjoy a good Colleen Hoover read!’