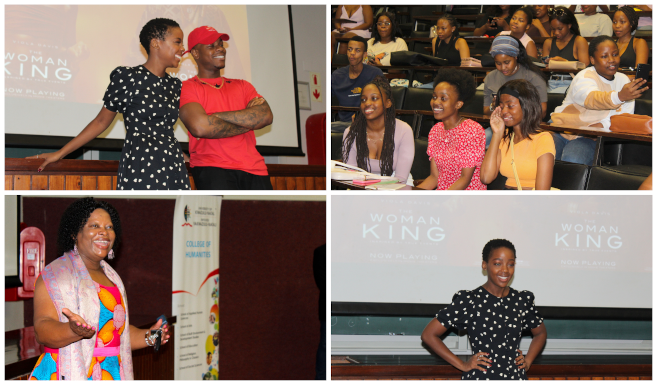 Highlights of Ms Thuso Mbedu and co-star Mr John Boyega visiting UKZN for a promotional tour of The Woman King.

Made possible by the KZNFC and lecturers of the Media and Cultural Studies discipline, Ms Luthando Ngema and Ms Abulele Njisane, the event saw over a hundred UKZN students attend to show their love and support to KZN’s very own talented powerhouse Mbedu.

The film is based on the real-life all-female army called the Agojie, who protected the West African kingdom of Dahomey, and centres on Mbedu’s Nawi, a young woman who hopes to join the Agojie, under the leadership of the fearless General Nanisca (Oscar Winner Viola Davis).

‘This is a great opportunity and learning point for film students to understand the value chain of film productions. This particular event emphasises the marketing and distribution process,’ said Ngema.

Welcoming the films’ cast and crew, Dean and Head of the School of Arts, Professor Nobuhle Hlongwa said this was a very special moment not only for the College but for KZN and South Africa. ‘We are truly honored to host the beautiful and talented Thuso Mbedu. Thank you to everyone who played a role to make this possible.’ She also thanked Mbedu on flying the KZN flag high and being an inspiration to young, aspiring creatives who one day hope to get to that level.

Mbedu and Boyega talked briefly about the process of preparing for and making the film from dialect coaching, to combat training and diet, and even doing their own stunt work. A question-and-answer session followed with many excited students asking questions related to the movie and the film industry at large.

Mbedu said she did not realise the impact the film had on her and for others. For her, it was part of the job. ‘I am honored and humbled be a part of something this big.’ She hoped that her visit inspired other students to follow in her footsteps and carve a name for themselves in the industry.

Bachelor of Arts Honours in Drama student, Mr Kwanele Nyembe, said this was a once-in-a-lifetime opportunity for him. After years of following Mbedu’s career trajectory, he finally had a chance to meet her and engage on her process of delivering such great work.

‘I remember once in class we had to choose a creative to present on and I chose her. To actually witness this moment in her career and to be in the same space with actors of such high-calibre is a great opportunity and memorable,’ he said.