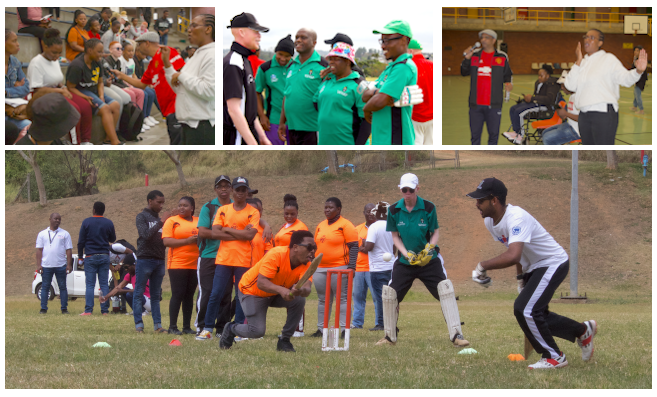 UKZN’s Disability Support Unit (DSU) in collaboration with the Differently Abled Student Association (DASA) and the Biokinetics, Exercise and Leisure Sciences Department held a Disability Equity Training (DET), Sports and Wellness Day at the Old Mutual Sports Hall (OMSH) at the Howard College campus on 3 September 2022. The event was attended by 115 students with disabilities from various UKZN campuses.

Dr Faaiza Shaikh, DSU student co-ordinator on the Westville campus, introduced the activities for the day, including board games like monopoly, chess, scrabble and cards designed for students with visual challenges as well as games including blind cricket, table tennis, volleyball, goalball and basketball. Hula hoops, tug-of-war and a wheelchair race were also part of the programme.

Approximately 10 Sports Science students and 25 KwaZulu-Natal Blind Cricket team members were present on the day to assist and cheer the students along. The HIV and AIDS Programme provided individual services to the students.

The DET programme was facilitated by Mr Nevil Balakrishna, the Disability Coordinator at Howard College campus. He interacted with the students about the challenges they face in society and their responsibility to bring about change. The training emphasised the important role that disabled students need to play to bring about change in society. ‘DET talks about recognising the role of disability as an issue of oppression and the need to balance the power relationships in society. We have a responsibility to educate the able body, we have the power to bring about change, said Balakrishna. He also pointed out that students with disabilities need to be proud of themselves and that disability rights are human rights, so they must stand up against discrimination.

‘We focus on developing students’ talent,’ said Mr Mbhazima Derrick Munyai, DSU independent trainer and sport co-ordinator on the Pietermaritzburg campus. Commenting on the sports he said: ‘Some of the students playing for the KZN Blind Cricket started here before they were selected for the provincial team and they also played abroad against India and Pakistan. So, the students selected from today’s games may be part of the provincial team playing in October.’

He pointed out that students need to be motivated in order to overcome challenges encountered. ‘Blind cricket and goalball go as far as the Olympics so, we try to push students with disabilities to be involved in provincial and national sport tournaments,’ he added.

Mr Ndumiso Nyawose, KZN Blind Cricket President and Blind Cricket South Africa National Coordinator, is one of the graduates who has grown in blind cricket to a provincial and national level. He shared his journey of being able to see and later becoming visually impaired while studying at university. He said that interacting with people was one of the greatest challenges when adjusting to his loss of eyesight, but joining blind cricket changed his life - it proved to be so much more than just playing sports. ‘I finally started to enjoy life again,’ adding Nyawose. ‘So, it is important to use sport to show people what you are capable of because sport is one of those things that brings people together,’ said Nyawose.

Sport science lecturer, Dr Khumbuzile Khumalo, who is fondly known as “KK”, said the idea behind the sport programme ‘is to uplift sport and allow students with disabilities who were marginalised to be recognised and involved in sports.’ She wants to engage more communities to recognise people with disabilities and stop the discrimination and name-calling in society. ‘We need to show them respect and love,’ said Khumalo.