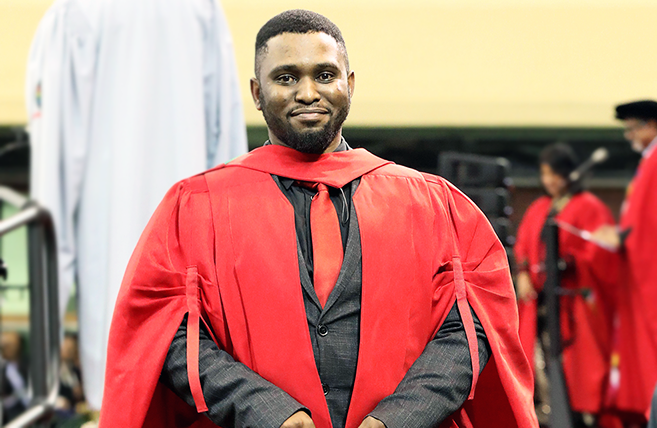 The study resulted in Dr Vuyolwethu Mxinwa being awarded a Doctor of Philosophy degree in Health Sciences (Physiology) from UKZN during the Spring Graduation ceremonies.

Mxinwa’s study sought to understand the interrelationship between the immune and metabolic systems, with a special focus on diet-induced obesity, metabolic syndrome and related cardiovascular complications.

His PhD research work showed that a high fat diet alters the metabolic system and the body’s ability to breakdown fats and glucose leading to an increase in blood glucose insulin and cholesterol levels.

The study also revealed that the changes in glucose and cholesterol levels alter the types of innate lymphoid cells and the proteins that these cells release in the blood, which are referred to as cytokines.

Mxinwa grew up in Lusikisiki in the Eastern Cape, completing his matric at Siwali High - a rural school which had no science or computer laboratories at the time.  His first encounter with computers was at UKZN.

‘My PhD is a huge accomplishment, not just for me and my family but also for the community I come from,’ said Mxinwa (30). ‘To my knowledge I am the first person to obtain a PhD from my high school - I hope and believe I will not be the last as my academic success should encourage more people from my community to enrol for postgraduate studies when there is an opportunity.’

Mxinwa enrolled at UKZN in 2018 and in 2020 was appointed as a lecturer in the Discipline of Human Physiology at the School of Laboratory Medicine and Medical Sciences. He is still actively involved in undergraduate teaching and supervising MSc and honours research postgraduate students.

During the course of his PhD journey he authored and co-authored more than 20 publications and a book chapter.

He was recently awarded the Research Equipment Grant of R561 125 under the category of emerging researchers.

‘My experience as a student at UKZN was great. I made friends and connections who have contributed greatly to my growth as a researcher and as a human being,’ said Mxinwa.

‘I had the privilege to work with supervisors of the calibre; Professor Bongani Nkambule and Professor Phiwayinkosi Dludla who both played a huge role in my development as an academic.’