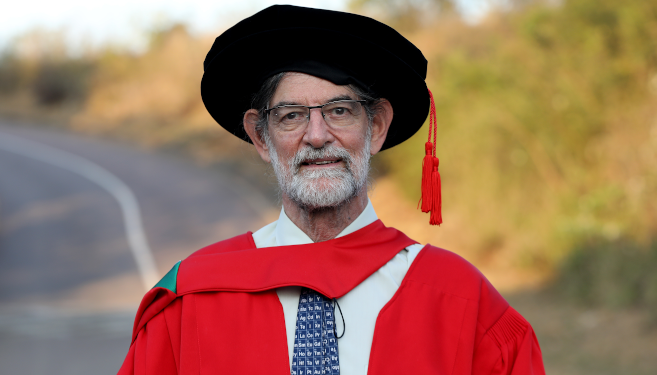 A journey spanning five decades and filled with many highs and lows reached completion with Dr Chris Brouckaert graduating with a PhD in Chemical Engineering at the grand age of 74.

Brouckaert is UKZN’s oldest graduate for the 2022 Spring Graduation season.

Brouckaert began his academic career in 1967, when he registered as an undergraduate student alongside the late Professor Chris Buckley. Little did he know that Buckley - who headed UKZN’s world-renowned Pollution Research Group (now the Water, Sanitation and Hygiene Research and Development Centre (WASH R&D Centre)) for many years until his untimely death in 2021 - would become his lifelong colleague and mentor.

On completion of his undergraduate degree Brouckaert registered for postgraduate studies but was unable to finish. Instead he became a part-time lecturer in Chemical Engineering at the then University of Natal, and progressed to a full-time appointment in 1978. In 1988 he left the Department to explore a career in industry. However, he soon realised that this was not for him and was fortunate enough to return to academia. In 1990 he was offered a contract research post in the Pollution Research Group, headed by his old friend, Buckley.

Brouckaert remained with the Pollution Research Group for the next 30 years until his retirement in 2021. Asked what inspired him to complete a PhD post-retirement, his laconic response was: ‘This was my third attempt, the first being in 1972, so my age at completion is largely a reflection of poor strategy and time management!’

The inspiration for this final attempt proved to be the accumulation of an almost complete series of published papers that became the basis for his dissertation, aided by the reduced time pressure that retirement allowed.

‘A moment of “inspiration” was the discovery that a notable finding in a PhD thesis that had attracted considerable notice and acclaim at international conferences was completely incorrect because of basic errors that should not have been made by someone familiar with the content of the (as yet unpublished) series of papers,’ he added.

‘The final spur was the thought that, after 20 years of having to correct people who addressed me as Dr, I will be able to relax,’ he joked.

Brouckaert paid special tribute to the support and encouragement he received from both his academic mentors, namely, Buckley and Professor George Ekama. Tragically Ekama - who would have acted as Brouckaert’s supervisor with Buckley as co-supervisor - suffered a stroke which ended his academic involvement in supervision. ‘And sadly, while I was in the process of submitting the registration for my PhD degree, Prof Chris Buckley became terminally ill,’ he said.

Brouckaert’s dissertation is based on a series of five papers published in Water SA that set out a framework and methodology for the mathematical modelling of bio-processes that have significant interactions with inorganic aqueous physicochemical processes. The papers represent a distillation of the modelling experience of the Water Research Group (WRG) at the University of Cape Town and the Pollution Research Group (now the WASH R&D Centre) at UKZN spanning some 15 years of collaboration.

‘The idea of writing a series of papers which would provide a comprehensive guide on developing and implementing simulation models of wastewater treatment processes was conceived by Prof Ekama from UCT in about 2012,’ said Brouckaert. ‘At that time, George was guiding the research of a large group of students, mostly at UCT, but also at UKZN and other universities around the world and the papers centred on a mathematical model of wastewater treatment plants that was jointly developed by UCT and UKZN, and continues to provide the basis for ongoing research.’

In a discussion with Ekama in 2019, it was decided that these papers could be used as a basis for his dissertation.

‘Chris Brouckaert’s affiliation to our Department stretches back many decades,’ said academic leader for Chemical Engineering at UKZN, Professor David Lokhat. ‘He was instrumental in developing a number of our undergraduate courses, lectured within our programme and has mentored and guided many of our postgraduate students on water-related projects.

‘Chris is a chemical engineer in every sense of the word. He has such a broad understanding of a range of issues related to our Discipline, although his passion is most definitely in modelling.

‘His PhD was very well received by his examiners, with one commenting that he had never before granted a doctorate without recommending any adjustments, testament to the excellent body of work that Chris has been involved in for a long time at UKZN.

‘We can only hope that some of his talent has rubbed off on the next generation. This PhD has been a long time coming for Chris, but I imagine nonetheless most fulfilling for a career dedicated to Chemical Engineering.’