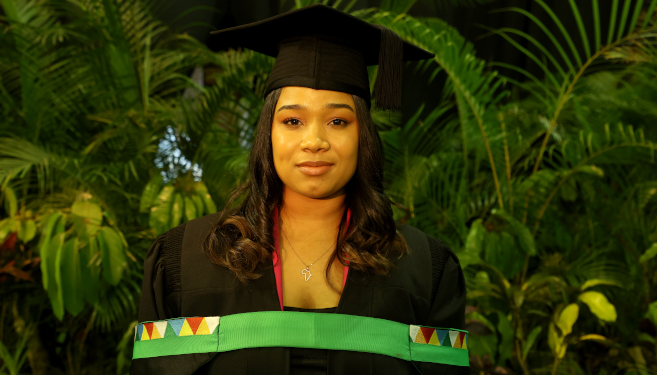 Under the supervision of Dr Moses Okpeku and Professor Matthew Adeleke in the School of Life Sciences, Roux assessed the presence or absence of mutant genes in malaria strains in northern KwaZulu-Natal to determine whether or not the Plasmodium falciparum parasite that causes the disease had again become sensitive to chloroquine and sulfadoxine-pyrimethamine, formerly the frontline drugs used to treat malaria.

Initially interested in learning more about chromosomal disorders and their prevention, Roux was intrigued by the subject of genetics and after completing her honours degree expanded her focus to disease control and elimination.

She was drawn to UKZN because of the Institution’s values and its enabling learning environment, as well as the international recognition afforded its scientific degrees, and its research productivity.

‘I have always wanted to contribute to something bigger than me, and studying genetics has given me that opportunity,’ said Roux.

She enjoyed the student atmosphere at UKZN that provided opportunities to balance her academic work with recreation and socialising. While an honours student, she was invited to join the Golden Key International Honour Society.

Despite the challenges of the COVID-19 pandemic that closed laboratories and campuses for a time, Roux managed to achieve excellent results. She published a review in the Frontiers in Genetics journal and co-authored two other publications.

Having completed her master’s, Roux is hoping to work in a research-based laboratory that focuses on disease control as well as community outreach and education.

‘My time in northern KZN highlighted the importance of educating communities about the disease as there are so many misconceptions, which is part of the reason many people go undiagnosed and untreated,’ she said.

Feeling that her work has just begun, Roux plans to build a career working with infectious diseases to understand how viruses and bacteria cause illness, as well as the science behind possible prevention and how to control their spread and treat disease effectively.

Roux acknowledged her mother for her support and encouragement through challenging seasons, and thanked her supervisors and laboratory colleagues who offered her guidance and support throughout her research.