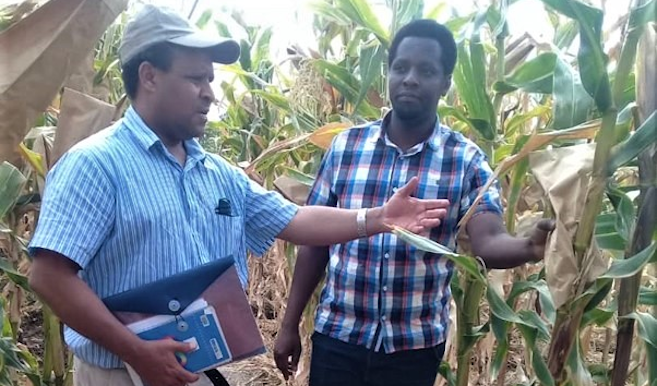 Dr John Lobulu, a researcher at the Tanzania Agricultural Research Institute (TARI) is receiving a PhD from UKZN after he successfully investigated the development of maize varieties resistant to the Striga parasite and compatible with a fungal biocontrol agent to combat the threats to food security posed by the weed that affects millions of small-scale farmers across Africa.

Lobulu’s thesis focused on breeding Zea mays L. in Tanzania for resistance to the asiatica and hermonthica species of Striga, commonly known as witchweed, and their compatibility to Fusarium oxysporum f.sp. strigae, a soil-borne fungal biocontrol agent.

Lobulu, who completed his research through UKZN’s African Centre of Crop Improvement (ACCI) with funds from the Alliance for a Green Revolution in Africa (AGRA), emphasised the importance of work like this to improve food security among resource-poor smallholder farmers and improve the availability of Striga resistant maize seed that is compatible with their needs. Application of the Fusarium biocontrol agent promotes higher yields in the areas affected by Striga.

Having worked with maize in several positions throughout his career, Lobulu decided to contribute to science and society by improving the yields of this crop that so many in Africa depend on.

‘The losses caused by Striga in smallholder farmers’ fields troubled me, so I asked myself how I could help them,’ he said.

Upon receiving a PhD scholarship, Lobulu approached UKZN’s Professors Hussein Shimelis and Mark Laing to develop a viable study to achieve his goals. Already used to working as a plant breeder where he had to schedule and prioritise his work carefully, he was able to balance his work and his studies and enable them to complement each other.

He said he was fortunate to work under Shimelis’ supervision at UKZN, and that his supervisors were professional, friendly and dedicated. He expressed appreciation to Shimelis for ensuring that he completed his studies without any difficulty and for always being available.

Lobulu also said he benefited from the ACCI’s programme which schedules UKZN-based activities for a year of the PhD process to accommodate students from outside South Africa and allow them to complete their field studies in their home countries. He added that the availability of world-class facilities including laboratories, physical and online libraries and support services made the process simpler.

Attaining his PhD was not without its challenges - the COVID-19 pandemic precluded visits to South Africa to write up his thesis, necessitating a more isolated, limited online writing process. Lobulu also contracted malaria during his studies which resulted in a loss of consciousness for five days, lengthy hospitalisation and follow-up health checks.

Despite these significant challenges, Lobulu triumphed, and was able to publish two manuscripts in peer-reviewed journals, with a further two under review.

With his PhD under his belt, Lobulu will continue his work with the TARI and finalise the development of Striga resistant varieties so that they can be released for farmers’ use.

Lobulu said that he is indebted to Shimelis for his excellent supervision, guidance and mentorship, and expressed gratitude to his co-supervisor Laing, in-country co-supervisor Dr Arnold Mushongi, AGRA, his parents Mr and Mrs Lobulu, his wife and his children for their patience, and the many others who supported his PhD journey.