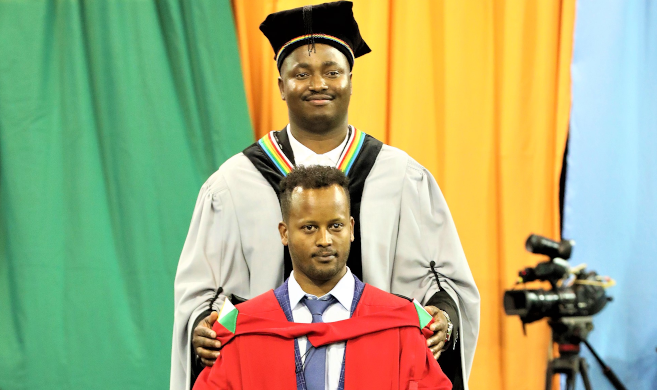 Dr Ashenafi Yirga graduated with his PhD in Statistics from the College of Agriculture, Engineering and Science.

Yirga was born and raised in Jijiga, a city in eastern Ethiopia. He completed his undergraduate degree in Statistics at Addis Ababa University and chose UKZN, which he described as ‘one of the leading universities in Africa’ for his postgraduate studies, where he was awarded a Bachelor of Science honours and MSc in Statistics, completing the latter in record time. Yirga’s MSc on statistical models to study the BMI of under-five children in Ethiopia was awarded with distinction.

Yirga received a scholarship from the Sub-Saharan Africa Consortium for Advanced Biostatistics (SSACAB) to pursue doctoral studies in Biostatistics at UKZN under the supervision of Professors Sileshi Melesse and Henry Mwambi, and Dr Dawit Ayele. He employed a statistical modelling approach known as Quantile Regression for Longitudinal Data to study CD4 counts among HIV-infected individuals. This approach was sourced from the Centre for the AIDS Programme of Research in South Africa (CAPRISA) under the guidance of Head Biostatistician, Dr Nonhlanhla Yende-Zuma. The novel technique relaxes the assumption of basing a regression model on the mean and instead uses any part of the distribution of the outcome of interest. The work was even more novel because it was applied to longitudinal data which is not common in statistical applications.

Yirga added further complexity by including random effects in order to capture data correlation and individual-to-individual heterogeneity. The study modelled disease progression and dynamics at population and individual levels. It produced five research papers, four of which have been published in ISI-indexed or Q1 (highly) rated journals, with one currently under review.

Yirga expressed his gratitude to the SSACAB-DELTAS Africa Initiative fund for funding his doctoral and master's studies. Currently a postdoctoral fellow in Health Data Science as part of the Data Science Initiative for Africa (DSI-A) training programme, he is keen to contribute to the growing body of research on public health that will improve the quality of life of HIV-affected individuals and the population at large.

He thanked all his lecturers who supported him on his academic journey and expressed his heartfelt thanks to his supervisors for their support and guidance and for growing his understanding of statistics. Yirga also praised God Almighty for all the blessings granted to him and his family for putting up with him during difficult times.