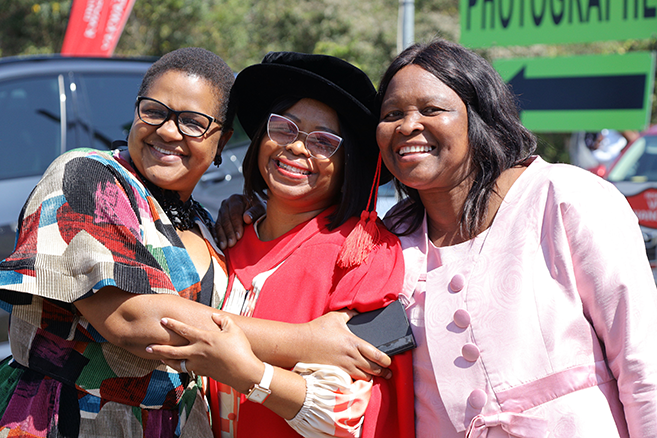 ‘I’m overwhelmed - I still cannot believe I made it. It was through the grace of God as it is only Him who makes things possible.’

So said Dr Bongiwe Mbatha - Human Resources (HR) Manager at the Umdoni Local Municipality in the Ugu Municipal District south of Durban - who was awarded a Doctor of Business Administration degree during UKZN’s Spring Graduation ceremonies.

Mbatha’s thesis was titled: The Role of Stakeholders Regarding Policy-Making in the Localised Sphere of Government in KwaZulu-Natal.

She was supervised by public governance expert Professor Thokozani Nzimakwe of the School of Management, IT and Governance, and a leadership and management expert from the Graduate School of Business and Leadership, Professor Emmanuel Mutambara.

Mbatha’s study, which examined the role of stakeholders regarding policymaking in the localised sphere of government in KwaZulu-Natal, found there was significant policy formulation influence on socio-economic development and that policymaking activities had an impact on service delivery.

The findings also revealed that policymaking activities in South African municipalities were hampered by several factors, including finance, stakeholders’ roles regarding policies, criticism from the opposition, lack of understanding of the policies, non-alignment of policies with the national legislation, lack of resources and political interference.

The study recommends adequate budgetary allocations; stakeholder participation; a strong political will; and alignment of policies with the national legislation.

With vast experience as a generalist in HR, Mbatha holds a National Diploma in HR, a Diploma in Occupational Health and Safety, a Bachelor of Technology in HR degree, an honours degree in Labour Relations as well a master’s degree in HR. Since joining the municipality in 2014 after 10 years’ service in the Department of Labour, she has managed to improve the working conditions of employees, and improved communication between the management, stakeholders and employees.

Mbatha has implemented policies and procedures in the Municipality and other critical aspects of HR, including wellness programmes, health and safety and organisational development.

Said Mbatha, who completed her doctoral studies during the COVID-19 pandemic: ‘This was not an easy journey - while I had the support of my supervisors I found myself spending a lot of time on my own, sometimes neglecting family.’

She advises executives thinking about starting the PhD journey to stay motivated and to focus on their long-term goal - this is what kept her on the right path!

Her future plans include advising young people on how to conduct research and assisting academics with supervision and guest lecturing.

Referring to her supervisors she said: ‘They were superb, I was very lucky to have them. Both are highly experienced - if I continue with research I will definitely collaborate with them.’