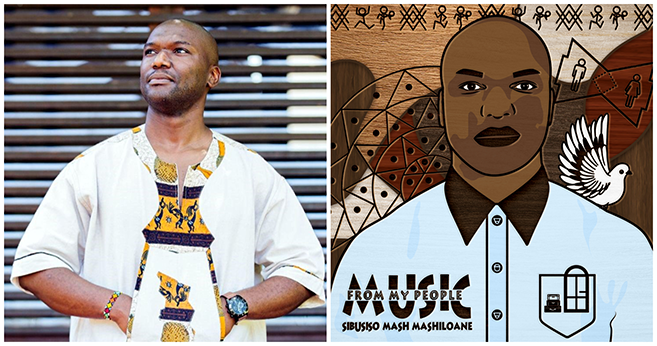 ‘This album is a multifaceted vessel and sonic document that archives some of the sounds people have used and continue to use as a testimony of their social conditions,’ said Mashiloane.

Music from My People is a 12-track album with a comprehensive approach that echoes many rhythmic languages and multi-generational comradery in sound in an exploration of self-identity. It is woven in the fabric of family, community, country, the African continent and the world.

The Jazz genre is interpreted in its many phases and decades, carrying the introspective experiences linked to specific times. The album is not only carefully curated and synchronised to direct the listener from one point to another, but is also a puzzle that pieces the listener’s personal interpretative experiences together, reflecting Mashiloane’s musical journey.

A number of industry stalwarts feature on the album, which was important to Mashiloane as he wanted different communities to speak through the music. They include percussionist Tlale Makhene, guitarist Bheki Khoza and tenor saxophone player Khaya Mahlangu.

Generations also meet in his music, as he features young talent, some of whom studied under his supervision, such as bassist Qhubekanu Mthethwa, trumpet player Thabo Sikhakhane and vocalist Wandithanda Makandula.

Mashiloane, who is now synonymous with the South African Jazz scene and stages across the globe, has five previous albums to his name that have received critical acclaim. He is a multi-award winning and nominated artist at prestigious ceremonies and events like the SAMAs, the AFRIMA awards and the International Urban Music Awards. He is currently studying towards a PhD which befittingly aims, through the lens of South African Jazz, to focus on the nostalgia-seeped themes of home that Mashiloane can’t help but find himself instinctively returning to.

Six years ago Mashiloane set himself a target to release an album a year for seven years. Since then, audiences have enjoyed the following award-winning albums:
2017 – Amanzi’ Olwandle
2018 – Rotha: Tribute to Mama
2019 – Closer to Home
2020 – Amanzi Nemifula: Umkhuleko
2021 – Ihubo Labomdabu

Hardcopies of Music from My People will be available for sale at all concerts for R150. The album can also be ordered through info@isupportodyou.com.