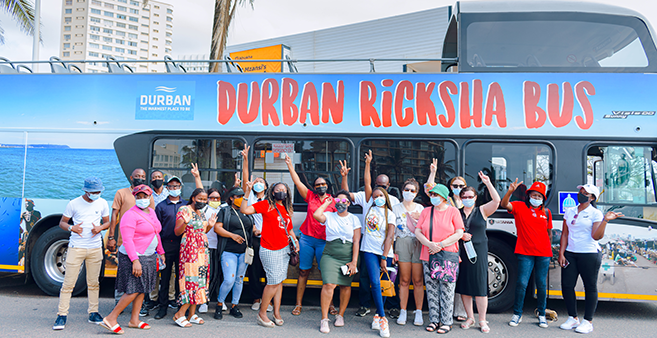 International students enjoy a tour of the city of Durban.

UKZN’s first-year international students were treated to a tour of the city of Durban.

The International Relations Office organised the tour with the aim of familiarising students from abroad with the city where four of UKZN’s five campuses are based.

Commenting on the day’s proceedings, Events Co-ordinator for International Relations, Ms Tholani Ngema, said, ‘We schedule this event every year for international first-year students so they can get accustomed and learn more about the city of Durban as their new home, away from home.

‘As the first in-person event of the year, this is also a great way for international students to socialise and interact with one another.’

The three-hour tour taken on Durban’s infamous open-top double-decker Ricksha Bus saw close to 20 students being guided around the city’s most scenic views. Starting the drive along the Golden Mile, it showcased the beachfront promenade, its hotels, restaurants and beaches, which are an attraction to tourists around the world.

Moving onto the city centre, the tour explored the city’s oldest market - Victoria Street Market - which saw students being exposed to the rich heritage and culture of Durban’s African and Indian population.

Making a stop for lunch at The Cube - a giant 3D cube filled with mural art - in Innes Road, the students were treated to beautiful views of the city and taught the Jerusalema Dance Challenge - which was a hit around the world during hard COVID-19 lockdowns.

Ms Caroline Chasara, a PhD student and Vice President of the International Students Association (ISA), explained how the tour enabled her to explore diversity as she could meet new people, make new friends, and network. While Ms Pauline Catalano, a French native who is part of the International Relations Staff Exchange Programme, remarked on how it was amazing to see the city and be taught about its rich history from the tour guide.

The tour involved driving down Florida Road, the epicentre of Durban’s nightlife scene, which students enjoyed.